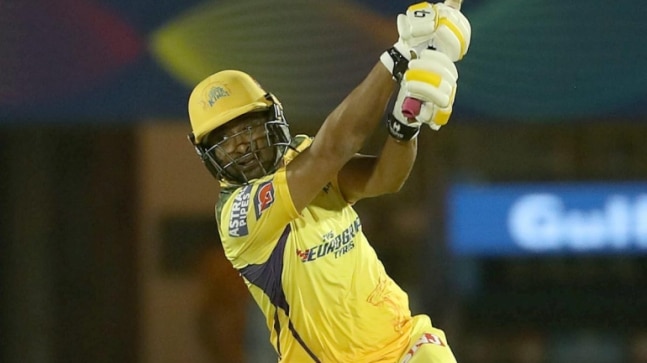 Punjab Kings defeated Chennai Super Kings by 11 runs at the Wankhede Stadium in Mumbai on Monday thanks to Shikhar Dhawan’s unbeaten 88 and a fine 42 from Bhanuka Rajapaksa. After the win, PBKS leapfrogged Kolkata Knight Riders and Delhi Capitals to move to No.6 in the IPL 2022 points table.

Ambati Rayudu played a stunning hand with 78 off 39 balls to keep Chennai Super Kings in the hunt for their 188-run target but MS Dhoni, who had turned the clock back with a vintage show against Mumbai Indians last week, could not repeat his heroics against PBKS.

CSK’s stunning last-ball win over Mumbai Indians seemed like a distant memory as their batters failed to come good against a disciplined PBKS bowling line-up. Ambati Rayudu was the lone warrior for the defending champions who desperately needed a win to

CSK have now lost six out of their eight matches in the season and continue to languish at No.9 on the points table. PBKS will be happy to return to winning ways after back-to-back defeats. Skipper Mayank Agarwal got out cheaply again but Shikhar Dhawan anchored the innings with a classy 88 not out to steer PBKS to a strong total.

After winning the toss, Chennai Super Kings would have wanted to restrict Punjab Kings and they did exactly that in the powerplay and the first half of the innings. But Shikhar Dhawan (88 not out) and Bhanuka Rajapaksa (42) teed off while Liam Livingstone joined in with 17 off 9. PBKS smashed 64 off the last 5 overs as they finished with 187 for 4 off their 20 overs after reaching 72 for 1 off the first 10 overs.

Chennai Super Kings needed a strong start to their chase of 188 but they lost Robin Uthappa to Sandeep Sharma in the second over of the innings. Sandeep got one to swing away from Uthappa whose top-edged it to Rishi Dhawan.

Mitchell Santner was sent up the order at No.3 but he struggled during his stay before Arshdeep Singh struck. Santner fell for only 9 off 15 balls. Rishi Dhawan was wearing a head protection gear because he was returning from a nose injury. In fact, this was his first IPL match in six years but he dismissed the in-form Shivam Dube in only his second over.

The asking rate had shot up for CSK when Ambati Rayudu joined Ruturaj Gaikwad at the crease in the 8th over.

Rayudu hammered Liam Livingstone in his first over and it looked like CSK’s chase could finally get some momentum but Kagiso Rabada returned to remove Gaikwad and PBKS took a stranglehold over the game.

Ambati Rayudu continued to attack and reached his half-century off only 28 balls. His counter-attacking innings kept CSK in the hunt for their third win of the season. Rayudu hit Sandeep Sharma for three sixes and a four in his final over to bring the equation down to 47 off 4 overs for the Super Kings.

Arshdeep Singh bowled a brilliant 17th over before Rabada struck to remove Rayudu for 78 off 39. He had played a masterclass but had began to get tired by the end of his innings. There was a roar at the Wankhede as MS Dhoni walked in to try and lay the finishing touches. Arshdeep bowled another over in the 19th – and CSK now needed 27 off the final over.

MS Dhoni hit Rishi Dhawan for a six to start the final over but eventually holed out in the deep off the third ball.

Shikhar Dhawan became the second batter after Virat Kohli to score 6000 runs in the Indian Premier League. He also became only the third Indian after Rohit Sharma and Virat Kohli to reach the milestone of 9000 runs in all T20 cricket. Despite those landmarks, Dhawan and Mayank Agarwal could not get PBKS off to a flying start.

Chennai Super Kings did well to contain the PBKS openers but the approach from Dhawan and Agarwal was bizarre considering they have some serious hitters including the returning Bhanuka Rajapaksa in their line-up.

Maheesh Theekshana inflicted the first damage on the PBKS batting when he snared Mayank Agarwal with the penultimate ball of the powerplay. It was then left to Dhawan and Bhanuka Rajapaksa to up the ante. However, PBKS managed to reach just 72 for 1 at the end of the first 10 overs of their innings.

It was in the second half of the innings that Shikhar Dhawan and Bhanuka Rajapaksa took off and punished the CSK bowlers.

Shikhar Dhawan broke the shackles in the 12th over against Mukesh Choudhary and Punjab Kings had laid the tone for a strong finish. During the course of his innings, Dhawan became the first player to over 1000 runs in the IPL against CSK.

Meanwhile, Bhanuka Rajapaksa came back to the side with a bang – his knock made you wonder why PBKS would leave a power hitter like him out for so long.

Livingstone walked out and played a nice cameo – his innings included a four and back-to-back sixes off Dwaine Pretorius as PBKS stormed towards a competitive total.

At the half-way mark, PBKS fans would have been worried – the innings was not going anywhere and Liam Livingstone had yet to bat. But the way Dhawan and Bhanuka Rajapaksa hit out, at least Punjab knew they would have something to bowl with. The two shared a 110-run stand for the second wicket before Rajapaksa fell to Dwayne Bravo.