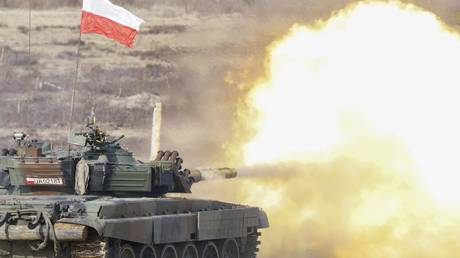 Poland has announced a massive upcoming military exercise, warning the residents of increased traffic and “columns of military vehicles” moving all across the country. The drills will kick off on May 1 and continue until the end of the month, the Polish military said in a statement on Thursday.

“Military vehicles will be found on highways, expressways and national roads,” the military said.

“The arrival and passage of the columns will also be used by the participants of the exercises, i.e. to practice the reception and deployment of allied forces, to coordinate cross-border activities, and to cooperate with host nations,” it added, without specifying which “host countries” exactly might be involved in the maneuvers.

The military vehicles will be moving around the country primarily at night in order to minimize the impact on civilian traffic. Still, some maneuvers will take place during the day, the military said, urging Polish citizens to avoid filming the military columns.

“We make an appeal to the public – let us protect data, especially in the current situation. Please do not publish information and photos showing troop movements and their location, dates and times of travel of military columns, [or] data on departures and landings of military aircraft,” the military said, adding that pouring such data into the web may have a negative impact on the “security and defense” of the country.

The announcement comes as Russian Foreign Intelligence Service (SVR) Director Sergey Naryshkin accused Warsaw of preparing to occupy the western part of Ukraine, which Poland considers as “historically belonging” to it. The potential “reunification” of Poland with western Ukraine will come under the guise of deploying a “peacekeeping” mission into the country under the pretext of protecting Kiev from “Russian aggression,” the official alleged.

Warsaw is currently negotiating the details of the operation with the US government, Naryshkin claimed, adding that it is set to be executed without a NATO mandate. Poland is also seeking other nations to volunteer and take part in the incursion, but has so far failed to get any allies for its endeavor, the official said. Apart from that, Polish intelligence is said to be seeking “reliable” Ukrainian politicians to form a pro-Warsaw counterbalance to Ukrainian nationalists.

Poland has firmly denied seeking to annex western parts of Ukraine, dismissing Naryshkin’s allegations as an “information operation against Poland and the US” intended to sow “distrust” between Warsaw and Kiev.

“The lies about Poland’s alleged plans to attack western Ukraine have been repeated for several years. The campaign was particularly intensified after the start of Russia’s invasion of Ukraine,” Stanislaw Zaryn, the spokesman of the Minister-Special Services Coordinator, has said.

Poland has been among the top supporters of Kiev amid the ongoing conflict between Russia and Ukraine, becoming the primary hub for deliveries of Western weaponry bound for the Ukrainian military. The country has also supplied Kiev with Soviet-era military equipment from its own stockpiles.