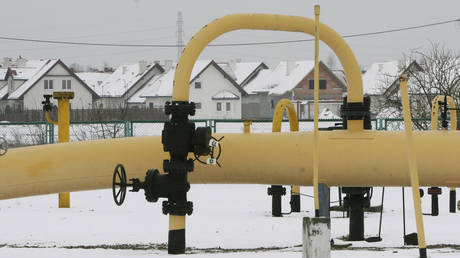 Poland’s state-owned energy company PGNiG confirmed on Tuesday that Russian energy firm Gazprom will halt deliveries on the Yamal contract as of Wednesday. Earlier reports suggested that the supply from Russia had already been cut off.

According to a statement from the Polish gas firm, “Gazprom informed PGNiG of its intention to completely suspend deliveries under the Yamal contract at the beginning of the contract day on April 27.”

Earlier on Tuesday, a Gazprom spokesman announced that “today, Poland is obliged to pay for gas supplies in accordance with the new payment procedure,” referring to Russia’s demand that “unfriendly countries” buy its gas in rubles.

Poland has refused to follow this procedure, and on Tuesday sanctioned Gazprom, which owns a 48% stake in the Polish company that co-owns the Yamal-Europe gas pipeline. The 4,000km line transports gas from the Yamal Peninsula and western Siberia to Germany and Poland via Belarus.

Media reports soon followed, suggesting that the supply to Poland had already been stopped, and that the government in Warsaw had convened a crisis meeting.

PGNiG insisted that supplies to consumers would be uninterrupted, with gas in storage and sourced from other suppliers making up the shortfall.

Poland has been one of the staunchest proponents of the anti-Russia sanctions imposed by the US and EU since Russia launched its military operation in Ukraine in February, and has allowed Western weapons to enter Ukraine from its territory.

While some gas-dependent countries such as Germany have cautioned the EU against cutting off the flow of gas from Russia, and others like Hungary have stated that they will keep buying Russia’s product, Polish Prime Minister Mateusz Morawiecki has vowed to ban all Russian coal, oil and gas imports by the end of the year.