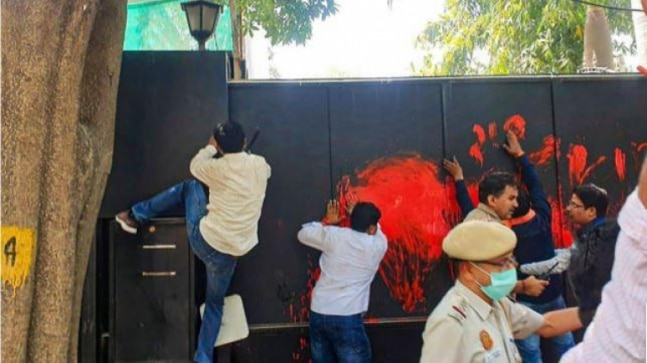 It is a “very disturbing state of affairs”, the Delhi High Court said on Monday as it pulled up the city police over the security breach and the ensuing vandalism at Chief Minister Arvind Kejriwal’s residence last month. The court, hearing AAP MLA Saurabh Bharadwaj’s plea on the attack, observed that the security arrangement outside the CM’s residence was inadequate.

“This kind of incident happening at the residence of any constitutional functionary – whether it is the CM, it could be a judge of the high court or Supreme Court, it could be any other Union Minister This is a very disturbing state of affairs that this kind of a thing could occur in the first place or such miscreants should succeed in their endeavour,” the court said.

Voicing displeasure over the “failure” of the police to prevent it, the court directed the Delhi Police Commissioner to fix responsibility for the “serious lapse”.

“It is very clear that there has been a failure. We want the Commissioner of Police to look into this. There are two aspects: one, on the part of the police to ensure that this should not have happened, and second, about the miscreants. You say you have made certain arrests. It’s a judicial proceeding and we don’t want to interfere there. You must look into the lapses by police,” the court said as the lawyer representing the force tried to put up a defence.

“Wireless messages were there. The force was there. Water cannon were used but the people came in from the sides. I’m not saying there was no breach. Bandobast was done because there was information about the protest permission being refused. One company of male and one company of female officers had been requisitioned. Highest officials are conducting a review of the security,” Additional Solicitor General (ASG) Sanjay Jain, appearing for the Delhi Police, told the court.

“The CM’s residence is right on the road. It’s a running road and a very important running road. It is such that the best possible arrangements with regard to barricading cannot block the road. We will examine how it went wrong,” Jain argued.

Abhishek Manu Singhvi, presenting the Aam Aadmi Party’s case, said: “We are handicapped because we don’t have the status report. Nothing like this can be kept closed as a matter of security. On a matter like this, they should share information with those who are directly concerned. Here, there was a breach of the wall of the chief minister’s residence. Courts have ordered SITs for other matters also. It’s not a matter of politics. There should be an inquiry.”

“We are definitely not satisfied with the bandobast. You have admitted that they breached barricades at point A, then B and C. How can the police say this?” the court asked the police.

“The last time, the court had expressed anxiety about how such an incident happened at the residence of a constitutional functionary. It is a factual position that is emerging. An investigation is in progress. Camera angles are being examined. We have presented the prima facie situation to you. Bandobast was made. As it eventually turned out, the crowd managed to sneak past,” Jain argued.

Although the incident “ought to not have happened”, a failure does not mean that the bandobast was “fundamentally flawed”, he added.

Not pleased with the defence, the court reiterated: “As we said, there are two aspects. One is the failure of the bandobast. How did this incident fructify? How did these people reach there? The other aspect is the damage to public property. The procession happened despite not being granted permission. What Mr Singhvi says is that some people have been identified.”

“Some remedial action has to be taken otherwise it will happen again. This is a very important facet of democracy: irrespective of our ideologies. He’s the CM. Like we say, the PM is everyone’s PM. He is the CM.”

Hundreds of workers of the BJP’s youth wing – the Bhartiya Janata Yuva Morcha (BJYM) – had breached the barricades to reach the entrance of the chief minister’s residence, destroying public property in the presence of the police.

“On March 30, 2022, several BJP goons, in the garb of a protest, launched an attack on the official residence of the Delhi CM. Videos and photographs show that these goons casually walked through the security cordon (maintained by Delhi Police), kicked and broke the boom barrier, broke the CCTVs cameras with lathis, threw paint on the gate of the residence, and almost climbed over the gate, while Delhi Police personnel simply looked on, doing little to stop the protestors,” the plea filed by the AAP MLA alleged.

The matter will be heard on May 17 next.