Pope Francis recently completed a six-day 'pilgrimage of penance' in Alberta, Quebec and Nunavut. First Nations, Métis and Inuit communities reflected on his apology and visit with hope, disappointment and calls for action. Support is available for anyone affected by their experience at residential schools or by the latest reports. A national Indian Residential School Crisis Line has been set up to provide support for former students and those affected. People can access emotional and crisis referral services by calling the 24-hour national crisis line: 1-866-925-4419. Mental health counselling and crisis support is also available 24 hours a day, seven days a week through the Hope for Wellness hotline at 1-855-242-3310 or by online chat at www.hopeforwellness.ca. To read more: https://www.cbc.ca/news/indigenous »»» Subscribe to CBC News to watch more videos: http://bit.ly/1RreYWS Connect with CBC News Online: For breaking news, video, audio and in-depth coverage: http://bit.ly/1Z0m6iX
Find CBC News on Facebook: http://bit.ly/1WjG36m
Follow CBC News on Twitter: http://bit.ly/1sA5P9H
For breaking news on Twitter: http://bit.ly/1WjDyks
Follow CBC News on Instagram: http://bit.ly/1Z0iE7O
Subscribe to CBC News on Snapchat: https://bit.ly/3leaWsr Download the CBC News app for iOS: http://apple.co/25mpsUz
Download the CBC News app for Android: http://bit.ly/1XxuozZ »»»»»»»»»»»»»»»»»»
For more than 75 years, CBC News has been the source Canadians turn to, to keep them informed about their communities, their country and their world. Through regional and national programming on multiple platforms, including CBC Television, CBC News Network, CBC Radio, CBCNews.ca, mobile and on-demand, CBC News and its internationally recognized team of award-winning journalists deliver the breaking stories, the issues, the analyses and the personalities that matter to Canadians. 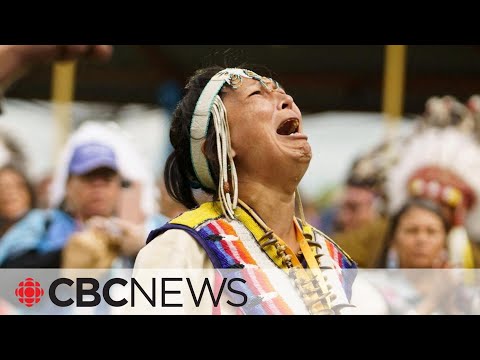