Protester sets himself on fire at London tennis tournament (VIDEO) 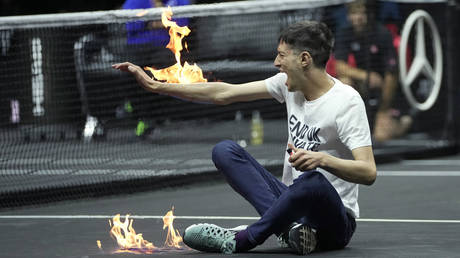 Fans watching Stefanos Tsitsipas’ match with rival Diego Schwartzman at the Laver Cup in London on Friday were stunned when a protester interrupted proceedings and sat down on the court, where he briefly set his right arm on fire.

Nearby security personnel quickly jumped into action, with one using his jacket to extinguish most of the blaze and stamp out the remaining flames, some of which had begun to take hold on the court at the O2 Arena.

The protester was then swiftly removed from the court by security. He was wearing a T-shirt which read ‘End UK private jets’.

It is unclear as to why he chose the Laver Cup as the venue for his protest.

#Update Reportedly a climate change protester has set himself on fire at the tennis court at Laver Cup on Roger Federer's last day as a professional player pic.twitter.com/J8xSPudUTa

It is also not known if the protester intended to set fire to himself or if he simply intended to damage the court.

He was seen screaming in pain as the flames affected his arm, and he also attempted to quickly put out the fire when he saw his arm ablaze.

The Laver Cup has not yet addressed the incident via an official statement, or through its social media channels.

Greece’s Tsitsipas, who is the sixth-ranked player in the world, was seen in the immediate aftermath of the incident asking the umpire if the court was safe to play on.

Tournament personnel also attempted to rectify any damage done to the court by the accelerant used by the protester, and were seen splashing water on the scene of the fire and wiping it down with towels.

The shocking scene came just hours before Swiss legend Roger Federer is due to play in his final-ever career match at the tournament, where he will team up with Rafael Nadal in the doubles.