Quiet tributes you may have missed at Queen’s funeral

RSS24.news
19/09/202220:07
The late Queen Elizabeth II was a master of symbolic dressing, using clothes, colours, hats and jewels to communicate with subjects and conduct soft diplomacy.
Needless to say, black was the predominant colour among the estimated 2000 guests packed into London’s Westminster Abbey for the ceremony.

And while the attendees’ choices of outfit were appropriately understated, hats, brooches and nods to national dress added character to the otherwise sombre attire.

Formal headpieces came in all shapes and sizes, from wide-brimmed hats to diminutive fascinators with dark veils.

More elaborate designs were seen on Carole Middleton, the mother of Catherine, Princess of Wales, and Britain’s Leader of the House of Commons Penny Mordaunt, whose hat featured an arrangement of dark feathers.

Indeed, no royal was too young to abide by tradition, with seven-year-old Princess Charlotte, now third in line to the throne also pictured in a dark hat.

For others from the Queen’s immediate family, outfits, sashes and medals were dictated by military rank.

The new king, Charles III, wore a Royal Navy uniform and carried a sword.
His son William, the newly appointed Prince of Wales, wore a Royal Air Force uniform, while Prince Edward and Princess Anne also assumed the uniforms of their respective ranks.

No longer a working royal, Prince Andrew instead wore a simple morning suit, though it was nonetheless embellished with various medals and decorations.

Prince Harry, too, arrived in civilian clothing, having stepped back from royal duties in 2020. 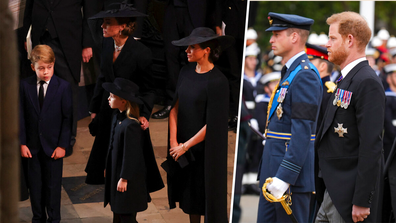 Catherine, Princess of Wales wore a pair of drop earrings made from pearls given to the Queen and Prince Philip for their marriage in 1947, as well as the Four Row Japanese Pearl Choker from the Queen’s personal collection (an item previously worn by the late Princess Diana).

Camilla, the Queen Consort, went further back in history with the heart-shaped Hessian Diamond Jubilee Brooch, a sapphire-encrusted jewel once owned by Queen Victoria, the late Queen Elizabeth’s great-great grandmother.

Speaking ahead of the funeral, she told one of her country’s domestic broadcasters, 1News, that the garment gave her “some way to bring a piece of New Zealand here with me.”

Other overseas dignitaries turned to their country’s national dress, too.

The Crown Prince of Bahrain arrived in a thobe and ghitraa, the ankle-length robe and headdress widely worn by men in the Gulf nation.

The day the world stood still: The funeral of Queen Elizabeth II