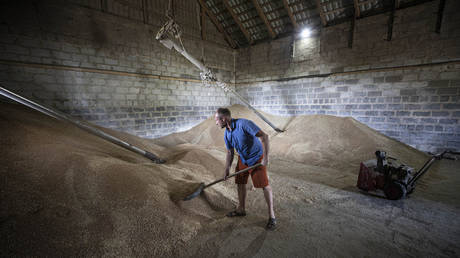 Moscow and Kiev have agreed to create a “coordination center” on grain exports in Istanbul, Turkey has said

Russia and Ukraine have agreed to establish a joint coordination center on grain exports in Istanbul that will include representatives from all parties, Turkish Defense Minister Hulusi Akar told local media following the four-way talks that also involved Turkey and the UN.

On Wednesday, negotiators from Russia, Ukraine, Turkey and the UN met in the Turkish city to discuss the situation regarding the held-up Ukrainian grain exports. Ahead of the meeting, Ukraine’s Foreign Minister Dmitry Kuleba said that Kiev and Moscow had been close to breaking the impasse on the issue.

Ukraine is one of the world’s leading grain exporters. Yet, it has been unable to export its grain by sea due to the ongoing conflict with Russia. Kiev and Western nations have accused Moscow of preventing Ukrainian grain shipments from leaving the nation’s Black Sea ports. Russia has denied such accusations and, in turn, blamed Kiev for the crisis, arguing that its forces mined the Black Sea waters, thus creating a threat to the cargo ships.