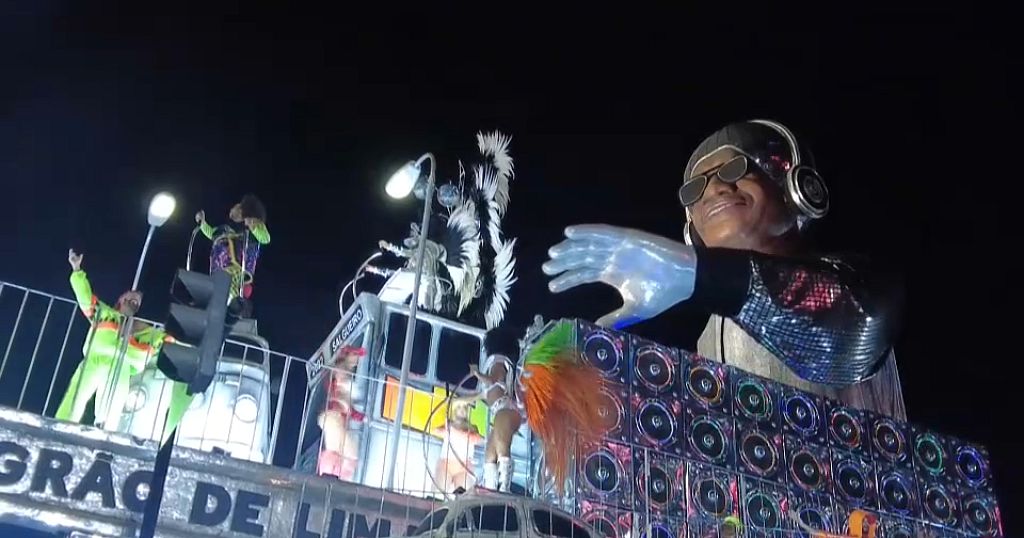 Beija-Flor and Salgueiros samba schools staged a parade for the first night of the carnival and unveiled themes dealing with racism or Afro-Brazilian culture and history.

Though the topics come to significant play in a country where the current president has faced numerous accusations of racism, the irrepressible desire to party was evident after what has been enormous suffering during the Covid-19 pandemic.

A spirit summarized wonderfully during the ultra-colored and delirious parade of the school of samba Grande Rio, an ode to the transgression and the madness of the carnival, with monumental floats and dancers with shimmering costumes that enchanted some 70.000 spectators.

In a sambodrome in trance, this school of Duque de Caxias, a poor suburb north of Rio, highlighted Exu, the Afro-Brazilian deity of the party, often demonized by the neo-pentecostal churches that support the far-right president Jair Bolsonaro.

Paraiso do Tuiuti, the first of six schools to march on Saturday night, had paid tribute to great black figures from around the world, from Nelson Mandela to Barack Obama, RuPaul or Beyoncé.

“It is really the good moment to approach this topic, to emphasize black leaders, because we live a complicated period, with full of prejudices”, said to the AFP Felipe Cordeiro, hairdresser of 32 years come especially of Vitoria, in more than 500 km of Rio, to march.

“My heart is beating a thousand times a hour, this will be my first time, I’m sure it will be magical,” he added, just before entering the dance.

And the magic was really there: the spectators were amazed when they saw the superhero Black Panther appearing like lightning from a float representing the fictional kingdom of Wakanda, thanks to an ingenious system of mechanical beams.

“The Rio carnival is made by black people. To take part in this festival, it allows me to affirm my identity”, says to the AFP Camila Oliveira, 32 years old teacher.

The carnival, which often represents all the diversity of the Brazilian society, also made the beautiful part to the natives, guardians of the safeguard of the Amazonian forest, one of the main ramparts against the global warming.

The forest is full of natural resources, such as guarana, a fruit with many nutritional and therapeutic virtues, a theme chosen by the Unidos da Tijuca school, with the refrain for its song: “Indigenous child, the forest is yours”.

This is a hot topic, as deforestation has reached record levels since the election of Jair Bolsonaro.

The Unidos da Tijuca parade notably exhibited a huge float with charred trees, with fire-breathing dragon heads representing the destroyers of the environment.

In another float, representatives of indigenous peoples held up signs demanding the demarcation of new reserves for indigenous people and protesting against a bill brought by allies of the Bolsonaro government to legalize mining exploration in these territories.

The sambodrome also saw a veritable menagerie of giant animals on parade: crocodiles, jaguars, snakes and, above all, a larger-than-life white elephant, at least as large as a prehistoric mammoth.

Six other schools had already paraded in the night of Friday to Saturday and they are thus 12 in total to dispute the title of great champion of the carnival, each parade being noted by the jurors according to nine criteria, like the quality of the floats or the costumes.

But for those who live from samba all year round, the fact of marching at this unusual time, two months after the date initially planned, is already a great victory.

The carnival was simply canceled in 2021 and postponed this year because of Covid.

“We had a hard time organizing the parades this year. Because of the pandemic, there was a lack of resources and there were

So much joy’: Brazil holds first carnival since Covid.