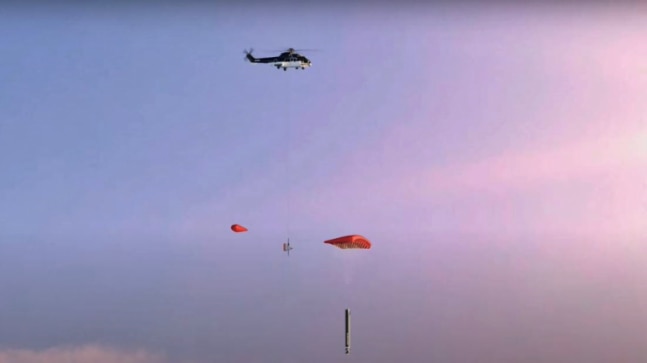 Reusable boosters are the biggest leap forward to ensure regular and cheap space transportation, and SpaceX has pioneered the technology by successfully landing over 100 boosters from space. It now has a competition.

The company has released a video showing how it will be done, where the team is seen practicing the mid-air capture using a helicopter tether.

While we await ideal weather conditions for #ThereAndBackAgain, the recovery team has been conducting capture tests using a stage 1 mass simulator. Our pilots make this look easy! pic.twitter.com/1r6PZvzBni

While the SpaceX’s Falcon-9 rockets use grid fins and thrusters to stabilise it and slow it down during re-entry after jettisoning from the payload, Rocket lab’s Electron launch vehicle uses parachutes to slow it down. This parachute is then hooked by a tether onboard a helicopter capturing the falling booster.

HOW WILL HELICOPTER CATCH BOOSTER FALLING FROM SPACE?

An hour before launch, the company’s Sikorsky S-92 helicopter will fly to the capture zone taking position approximately 150 nautical miles off New Zealand’s coast. Nearly 2:30 minutes after launch, the Electron launch vehicle (first stage) will separate, as the second stage pushes forward, the boosters will begin its descent back to Earth reaching speeds of almost 8,300 kilometers per hour.

During its re-entry, the booster will feel the heat of Earth’s atmosphere reaching a temperature of 2,400 degrees Celsius. The launch vehicle will deploy a drogue parachute at an altitude of 13 kilometers above the surface followed by the main parachute at six kilometers. This will slow down the free-falling rocket to 36 km per hour.

This is when the Sikorsky S-92 will come into play, attempting to rendezvous with the returning stage and capture the parachute line via a hook. “Once the stage is captured and secured, the helicopter will transport it back to the land where Rocket Lab will conduct a thorough analysis of the stage and assess its suitability for flight,” Rocket Lab said.

Rocket Lab founder and CEO, Peter Beck said that the company is excited to enter this next phase of the Electron recovery programs we’ve conducted many successful helicopter captures with replica stages, carried out extensive parachute tests, and successfully recovered Electron’s first stage from the ocean during our 16th, 20th, and 22nd missions.”

Rocket Lab has previously conducted three successful ocean recovery missions where Electron returned to Earth under the parachute and was recovered from the ocean.