US Secretary of State Antony Blinken Monday stated that Russia was failing in its war aims and Ukraine was succeeding. This came following the visit of top officials from the United States, including Blinken, to the Ukrainian capital Kyiv. The delegation met President Volodymyr Zelenksyy and assured him of enhanced military aid and the return of American diplomats.

Here are the top developments from the Russia-Ukraine war:

🔴 Blinken and US Defence Secretary Llyod Austin met Zelenskyy in Kyiv on Sunday. During the meeting, the officials informed the Ukrainian President that the US had approved a $165 million sale of ammunition for Ukraine’s war effort, along with more than $300 million in foreign military financing.

🔴 Blinken also stated that President Joe Biden will announce his nomination of veteran diplomat Bridget Brink to be the next US ambassador to Ukraine. Brink has held various diplomatic positions and was serving as an ambassador to Slovakia since 2019. The Secretary of State also added that American diplomats who left Ukraine before the war would start returning to the country this coming week. 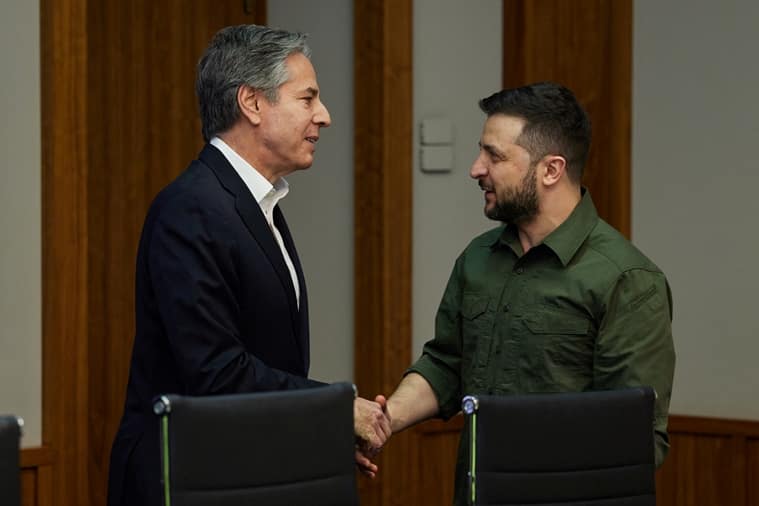 Ukraine’s President Volodymyr Zelenskyy and US Secretary of State Antony Blinken shake hands before a meeting, as Russia’s attack on Ukraine continues, in Kyiv, Ukraine. (Reuters)

🔴 “When it comes to Russia’s war aims, Russia is failing. Ukraine is succeeding. Russia has sought as its principal aim to totally subjugate Ukraine, to take away its sovereignty, to take away its independence. That has failed,” Blinken told reporters in Poland a day after the Kyiv visit.

🔴 Zelenskyy, on his part, appreciated the US’ support and spoke about continued efforts to end the war. “The priorities are weapons and support from the United States of America and our partners, European leaders, in terms of our army’s strength and support in certain areas… The second issue is the sanctions policy against the Russian Federation because of the full-scale invasion and all the terror they have committed in Ukraine,” the President was quoted as saying by news agency AP.

🔴 The UK military intelligence, in its latest update, stated that Russia was “yet to achieve a significant breakthrough” due to insufficient “logistical and combat support enablers”. It added, “Russia has made minor advances in some areas since shifting its focus to fully occupying the Donbas.” 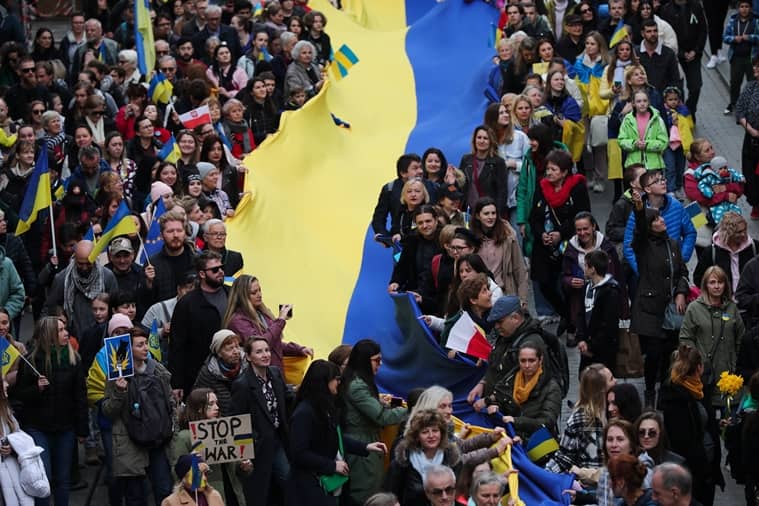 People carry a huge Ukrainian flag as they participate in a peaceful demonstration “Solidarity with Ukraine” in Krakow, Poland, April 24, 2022. (Reuters)

🔴 Speaking about the Russian advances in Mariupol, a key port city in eastern Ukraine where fighting has been concentrated for weeks, the UK military intelligence said, “Russia’s decision to besiege rather than attack Mariupol’s Azovstal steel plant means many Russian units remain fixed in the city and cannot be redeployed. Ukraine’s defence of Mariupol has also exhausted many Russian units and reduced their combat effectiveness.”

🔴 In another reported attack, the Governor of Ukraine’s central Vinnytsia region on Monday stated that Russia has fired rockets at the Zhmerynka and Kozyatyn towns. The attack is claimed to have caused injuries and deaths, however, a specific count is yet to be determined.

🔴 On Monday morning, an oil depot in Russia’s Bryansk region, near the Ukrainian border, caught fire. The cause of the fire is yet to be determined, and no casualties were reported from the incident. Earlier, Russian authorities had blamed Ukraine for attacking residential buildings in the area.