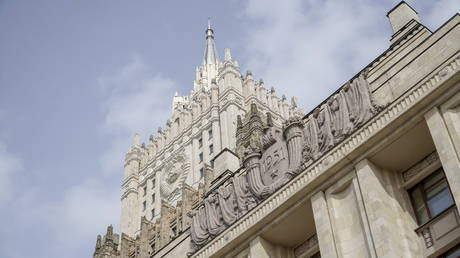 Once the Ukrainian side offers meaningful steps that would make direct talks worth conducting, that possibility will be considered, the Russian Foreign Ministry said on Monday. Kiev has threatened to withdraw from the peace negotiations altogether, and vowed to “immediately” retake any territory under Russian control with the help of weapons from the West.

Asked about the possibility of a face-to-face meeting between Russian and Ukrainian delegations, Russian Deputy Foreign Minister Andrey Rudenko told reporters the conditions are not in place yet.

“As soon as we have meaningful agreements on which a substantive exchange of views can be held, then this issue will be considered. Such a thing does not yet exist,” Rudenko told reporters.

The two sides last met in Istanbul, Turkey on March 29. The documents Ukraine sent to Russia deviated from what had been agreed upon, Russian Foreign Minister Sergey Lavrov said on April 7, accusing Kiev of not negotiating in good faith.

On Saturday, Ukrainian President Volodymyr Zelensky said the talks would be off if “a pseudo-referendum is announced in any new pseudo-republics of Ukraine,” or if “our people are destroyed in Mariupol” – referring to the remnants of the neo-Nazi “Azov” unit trapped in the Azovstal steel factory, who claim they are accompanied by women and children there.

Zelensky, who met with the US foreign and defense ministers over the weekend, also vowed to keep fighting Russia, as part of a pitch to get more weapons from the West.

“Whatever they occupy, we will return. It will not be a matter of eight years, like from 2014, it will be immediate. This is a matter of weapons. If we have enough of them, we will immediately begin to recapture the occupied territory,” he said.