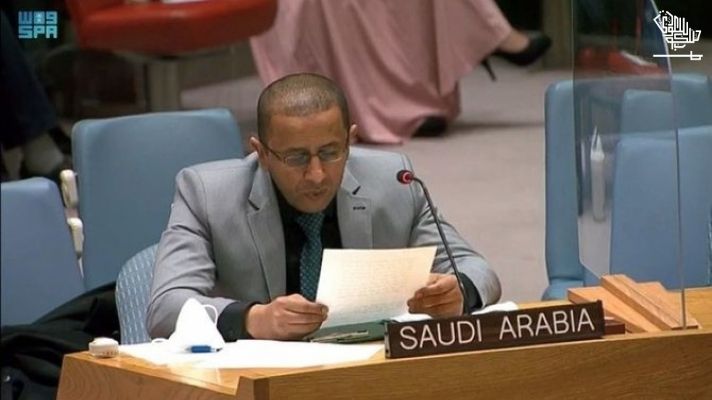 New York — Saudi Arabia affirmed its commitment to the Palestinian cause and to ending the Israeli occupation. Establishing an independent Palestinian state with Al-Quds as its capital and the right of return for Palestinian refugees.

The reiteration came in Counselor Mohammad Al-Ateeq’s speech. Ateeq is the Chargé d’Affaires of the Permanent Mission of Saudi Arabia to the United Nations.

Al-Ateeq addressed the UN Security Council’s session on “The situation in the Middle East, including the Palestinian cause”.

Al-Ateeq stressed the importance of lasting peace in the Middle East in the strategic option of a two-state solution, according to international references.

The 2002 Arab Peace Initiative, return of refugees, and an end to the Israeli occupation of Arab territories.

Al-Ateeq strongly condemned the Israeli attack on the Al Aqsa mosque. He said,

“Muslims’ holy month of Ramadan witnessed the Israeli occupation forces storming Al-Aqsa Mosque, closing its gates and attacking defenseless worshippers inside the mosque and in its outer courtyards.”

Al-Ateeq pointed out that the escalation is a blatant attack on the Islamic nation and violates relevant international resolutions.

Al-Ateeq called on the world, and the UN Security Council, particularly, to hold the Israeli occupation forces fully responsible for the attacks on the defenseless Palestinian people.

These violations lead to more violence and security tension in the region. He added Saudi Arabia’s strong condemnation of the Iran-backed Houthi militia’s terrorist attacks.

He welcomed the transfer of power by former Yemeni President Abd Rabbuh Mansour Hadi to the Presidential Leadership Council under the Yemeni constitution and GCC initiative.