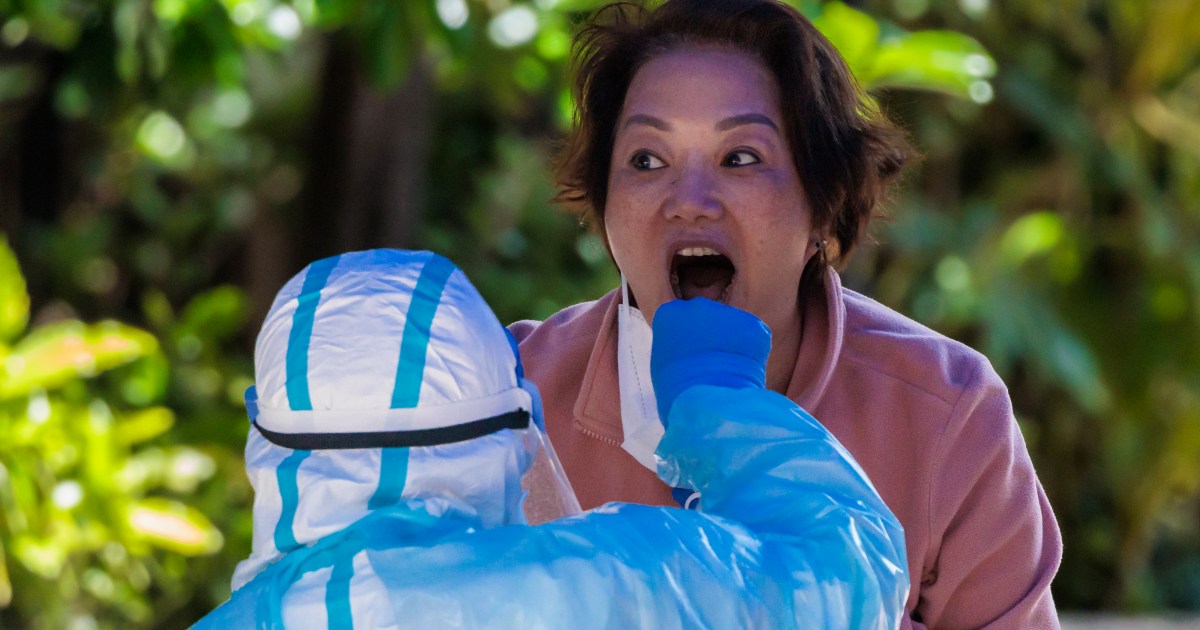 Shanghai authorities have erected fences outside residential buildings in the city to contain a COVID-19 outbreak, sparking renewed outrage over a lockdown that has forced many of the Chinese city’s 25 million residents to remain indoors.

China’s most populous city and most important economic hub is battling the country’s biggest COVID-19 outbreak by closing off areas of the city and forcing all those who test positive into quarantine centres.

The lockdown in Shanghai, which for many residents has lasted more than three weeks, has fuelled frustration among the public over lost wages, family separations, poor conditions in quarantine, and lack of access to medical care and food.

China reported 21,796 new community-transmitted COVID-19 infections on Sunday, with the vast majority being asymptomatic cases in Shanghai. Across the country, many cities and provinces have enforced some version of a lockdown in an attempt to slow the spread of the coronavirus.

The latest outbreak in Shanghai, driven by the highly contagious Omicron variant, has seen hundreds of thousands of cases detected in the city but fewer than 100 deaths since the outbreak began nearly two months ago.

On social media, images of government workers wearing hazmat suits have gone viral as they sealed off entrances to housing blocks in the city and closed off entire streets with green fencing, prompting questions and complaints from residents.

“This is so disrespectful of the rights of the people inside, using metal barriers to enclose them like domestic animals,” a user of the social media platform Weibo said.

One video showed residents shouting from balconies at workers who tried to set up fencing before relenting and taking the barricade away. Other videos showed people trying to pull the fences down.

“Isn’t this a fire hazard?” asked another Weibo user of the policy to fence people into homes.

Many of the fences have been erected around locations designated as “sealed areas”, which are residential buildings where at least one person has tested positive for COVID-19, meaning those inside are forbidden from leaving their front doors.

A notice on Saturday, reportedly from a local authority and shared online, said “hard quarantine” was being imposed in some areas.

The Shanghai government did not respond to a request for comment.

The lockdown in Shanghai has also dragged on China’s economy, with factory production disrupted by snarled supply chains and difficulties faced by residents returning to work.

Daily citywide COVID-19 tests are being carried out. In the past week, authorities have also transferred entire communities – including uninfected people – to quarantine centres, saying they need to disinfect their homes, according to residents and social media posts.

Many residents have turned to the internet to criticise the lockdown, but are using euphemisms and other means to battle government censors who often remove content critical of the authorities.

Videos on social media of “Do You Hear the People Sing?”, a protest anthem from the opera “Les Miserables”, have been widely reposted, with the title of the French musical receiving over 90 million mentions on WeChat on Saturday, according to app data.

China largely succeeded in keeping COVID-19 at bay following the initial outbreak in Wuhan in late 2019 with what it termed a “dynamic zero” policy aimed at stamping out chains of infection.

That approach has been challenged by the spread of the highly infectious but less deadly Omicron variant, which has prompted cities to impose various levels of restrictions on movement.