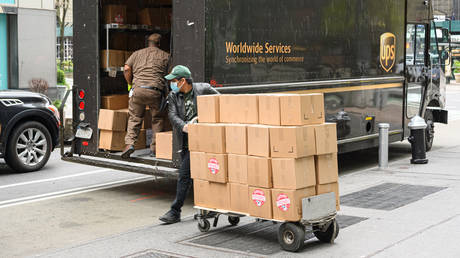 UPS operations in Ukraine and Belarus will also be scrapped

US shipping and logistics company UPS has decided to suspend commercial activities in Russia, Belarus, and Ukraine, Reuters reported on Tuesday. The step has reportedly been taken due to the ongoing conflict in Ukraine.

UPS suspended parcel delivery to Russia and Ukraine at the end of February, when Russia launched its military operation in the neighboring state, along with another US shipping giant, FedEx. Neither company has announced when they plan to resume their services in the region.

According to the publication, direct deliveries to all three countries amounted to less than 1% of UPS’ revenue in 2021. Due to this, it is expected that the halt in the company’s activities in the region will not cause significant losses.

Earlier on Tuesday, UPS reported better-than-expected quarterly earnings after the company raised prices amid an uptick in e-commerce. According to IBES data from Refinitiv, UPS earned $24.4 billion in the first quarter of the year, beating analysts’ expectations of $23.78 billion.