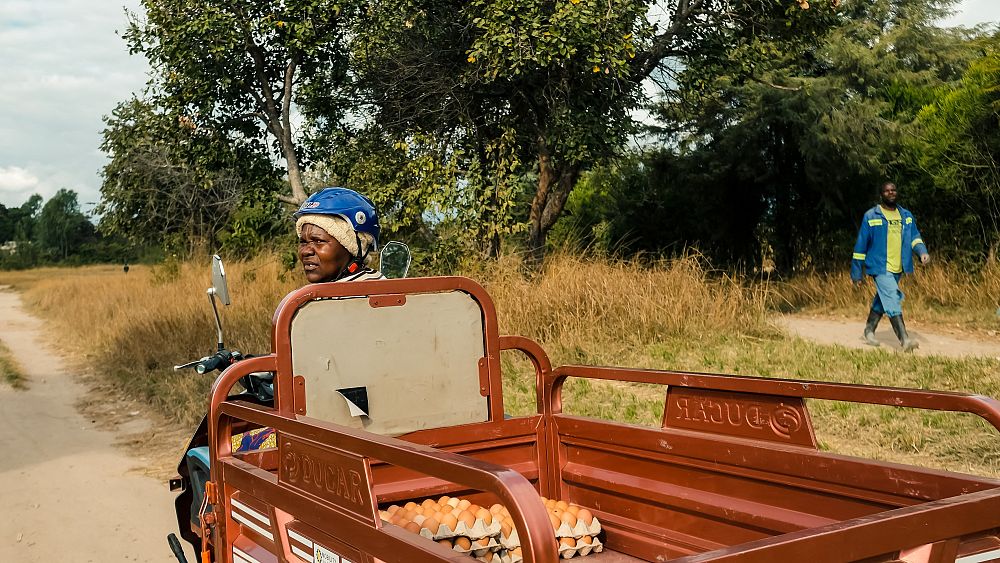 For years, selling eggs was a joyless business for Danai Bvochora as most of the money she made went to cover minibus fares to the market in a rural area of Zimbabwe.

That was until a solar-powered electric tricycle changed things for the better.

“We used to carry loads on our heads before. The tricycle has lessened the burden,” said the 47-year-old from Domboshava, about 40 kilometres (25 miles) north of Zimbabwe’s capital, Harare.

She carefully loads eggs onto the tricycle’s trailer before embarking on a bumpy eight-kilometre journey to the market.

“We even use it to go to church and worship,” Bvochora said, explaining that a single trip to buy chicken feed from a local business centre used to cost her around €12. But charging her new solar-powered vehicle sets her back only about €2.50 every two weeks, and the mother of two is now making a profit.

Bvochora is among a group of women in Domboshava, a district renowned for its picturesque hills and giant boulders, who received a tricycle last year as part of a European Union-funded project to assist small-scale farmers.

Assembled by Harare-based social enterprise, Mobility for Africa, the off-road three-wheelers were first introduced into Zimbabwe in 2019 to help women develop their businesses, said the company’s director Shantha Bloemen.

Transport has historically been inadequate in sparsely populated rural areas of Zimbabwe, where women often have to walk long distances carrying heavy loads on their heads to trade products, which sometimes spoil on the way in the heat.

But the idea of addressing the problem with electric three-wheelers raised a few eyebrows at first, said American-born Bloemen, who has lived in the country since the 1990s when she came to work for UNICEF.

“It was very lonely when we started,” she said, explaining that her team had to work hard to prove to funders that the idea was viable. “No one was talking about electric mobility in Africa let alone for rural women.”

Three years later, the social enterprise is planning to more than triple its current fleet of 88 motorised vehicles by the end of 2022. It operates three solar-powered stations, where drivers can come to swap their lithium battery for a fully charged one when running low on energy — and foots the bill when something breaks.

Zimbabwe has faced tough economic conditions for more than two decades, with rural areas hard hit. The country’s economy is mainly driven by the informal sector, to which these Domboshava women farmers belong.

While some of the three-wheelers — nicknamed ‘Hamba’ or ‘go’ in the local Ndebele language — were bought by the EU and then gifted to locals, others are rented out for €5 a day.

Phyllis Chifamba, a 37-year-old mother of four, uses her rented vehicle as a taxi. Her clients include sick people going to a clinic, pregnant women going for medical checks, and villagers and farm dwellers going to do their shopping and other errands.

“I am able to provide food for my family and pay school fees for my children with the money I make from using the Hamba,” she said.

Mobility for Africa said it was planning to expand operations to other areas.

“African women are the most entrepreneurial, most productive but no one takes them seriously,” said Bloemen. “If we solve the transport problems, rural economies will work. Small farmers will get more produce to the market.”

Beneficiary Frasia Gotosa said her small business has improved since she has been driving to the market as her vegetables no longer rot while waiting for the bus or pushing a wheelbarrow.

“Now I get to the market while my produce is still fresh,” she said.

Watch Euronews’ full report in the player above.