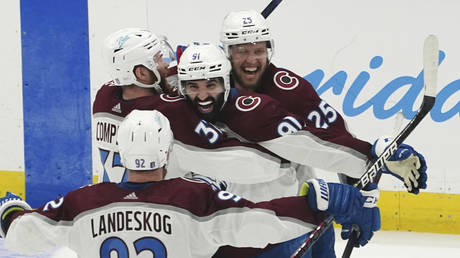 Tampa Bay Lightning coach Jon Cooper suggested that the goal which pushed his team to the brink of defeat in their Stanley Cup Final against the Colorado Avalanche was illegitimate, as the two-time defending champions suffered a 3-2 overtime loss in Florida on Wednesday night.

The returning Nazem Kadri struck at the 12:02 mark in overtime to hand the Avs a 3-1 series lead as they chase a first Stanley Cup since 2001.

But the nature of the result was questioned by Bolts coach Cooper amid suggestions that Colorado had six men on the ice before the game-winning goal.

“This one is going to sting much more than others,” said the Canadian.

“You’re going to see what I mean when you see the winning goal. And my heart breaks for the players. Because we probably still should be playing.”

KADRI PUTS IT IN

THE COLORADO AVALANCHE ARE A GAME AWAY FROM THE STANLEY CUP@spittinchiclets pic.twitter.com/7iWM4tuKuc

Game sheet says there were six Avalanche players on the ice when Kadri’s OT winner was scored. pic.twitter.com/kufhJ8X0hm

UPDATE: The NHL is now saying that Erik Johnson was not on the ice when the winning goal was scored.

However this picture, courtesy of @faiello_mari, still shows six Avalanche players on the ice at the time of the goal. https://t.co/Uh685EndxV pic.twitter.com/CUwJPVdDi6

Camera angles showed that the Avs did have six skaters on the ice when Kadri collected the pass before scoring beyond Russian goalie Andrei Vasilevskiy, although debate centered on whether Nathan MacKinnon was close enough to the bench to be considered a “retired player.”

Responding to the controversy, the NHL said it was a “judgement call that can be made by any of the four on-ice officials.”

“Following the game, [NHL] Hockey Operations met with the four officials as is their normal protocol. In discussing the winning goal, each of the four officials advised that they did not see a too many men on the ice situation on the play,” the organization said.

Perhaps unsurprisingly, Kadri said he saw no issue with his game-winning goal.

“I’m not quite sure what he [Cooper] was thinking of why it shouldn’t have counted. That kind of confuses me a little bit,” said the center.

“The puck hit the back of the net, end of story, so not sure why he would say that.”

The goal from Kadri, who was returning from thumb surgery for his first game of the finals, has pushed the Avs to within touching distance of a first Stanley Cup since 2001 and what would be a third title in franchise history.

Two-time defending champions the Bolts are aiming to be the first team to achieve a Stanley Cup ‘threepeat’ since the New York Islanders won four in a row at the start of the 1980s.

The hosts had taken the lead in unusual circumstances at Amalie Arena on Wednesday night, scoring after just 36 seconds when Erik Cernak struck a shot which knocked goalie Darcy Kuemper’s mask off.

Kuemper then failed to stop Anthony Cirelli as he put his team in front, with the play being allowed to continue as it was an ongoing scoring chance, rather than facing the usual whistle when a goalie loses his mask.

@espnSteveLevy I’m a NYR fan. How did you all miss this?! I saw it live, Cirelli’s stick knocked his mask off not the puck. Should be “no goal” goalie interference. Come on, this is the Stanley Cup Finals!! pic.twitter.com/u1e34ybmfx

Avs winger Mikko Rantanen leveled the score at the 5:17 mark of the second period, before Bolts defenseman Victor Hedman restored his team’s lead just over five minutes later gave his team a 2-1 lead.

Colorado again dragged themselves back into the game at 2:53 in the third period when a Nico Sturm shot deflected off Andrew Cogliano and past Vasilevskiy to send the game to an extra frame.

Vasilevskiy ended with 34 saves but was unable to prevent his team slipping to defeat. Along with the goalie, Russian stars Nikita Kucherov and Mikhail Sergachev are also targeting a third Stanley Cup. Kucherov lined up on Wednesday despite injury concerns following a nasty incident in Game.

The Avalanche have one Russian player on their roster in the form of winger Valeri Nichushkin.

The two teams now return to Denver for Game 5 on Friday, for what promises to be fervent home crowd at Ball Arena.