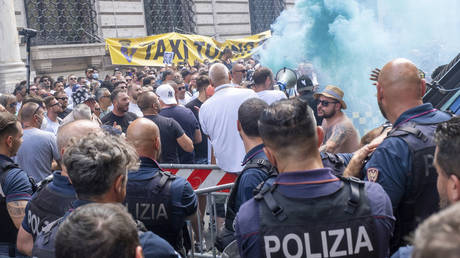 Hundreds of taxi drivers have taken to the streets in Rome to protest against the government’s plan to liberalize the public transport sector by integrating ride-sharing operators into it.

In the morning, several union representatives were seen chained together in front of the Chigi Palace – the official residence of the prime minister – for the second day in a row. On Tuesday, they were quoted by the local media as saying: “We chained ourselves today to be free tomorrow.”

Occasional clashes with police officers, deployed in large quantities to keep the demonstrators out of the government building, have also been reported.

The protest of taxi drivers in Rome continues, bombs towards Mario Draghi. Taxi drivers from Milan, Turin, Genoa and many other cities in northern Italy also left for Rome. The patience of the Italian people is dead. pic.twitter.com/AmdjouRuGY

While some of the slogans and posters seen at the demonstration target the lawmakers and the prime minister, Mario Draghi, most of them take aim at the car service giant Uber, which – along with other large players— taxi drivers believe will get a boost from the new legislation, while the small carriers will suffer. Uber exists in Italy but operates only on a limited basis and only in major cities. However, it has eyed expanding its operations after striking a deal to integrate its app with the largest taxi dispatcher in Italy, IT Taxi.

Insurrection of Italian taxi drivers near the parliament in Rome towards Mario Draghi, Uber and EU. pic.twitter.com/6p5VlI1FnI

Article 10 of the Competition Bill, which is still under consideration, aims to promote competition, provide for the development of technological platforms and, most importantly, the general deregularization of the market. Last week, Teresa Bellanova, the Deputy Minister of Sustainable Infrastructures and Mobility, explained that the government does not want to create problems for taxi drivers but is simply looking to satisfy the “need for income” of all workers while ensuring “efficient mobility” for its citizens.

Meanwhile, the protests of taxi drivers who are demanding the complete removal of Article 10 have been going on for weeks now. This week’s protest, however, unlike the others, started spontaneously on Tuesday, ignited by the recent publication of Uber Files – leaked documents from the tech company exposing some of its controversial tactics. Among other things, the documents revealed that Uber execs saw themselves as “pirates” taking over the transportation industry, with help from high-profile friends.

The unions claimed that the Uber Files “set fire to the Italian squares” and that their government was “deaf and blind” if it wanted to continue with its plans of market liberalization.