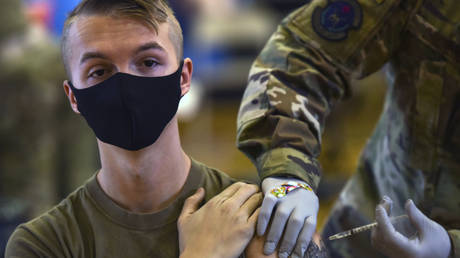 The US government is still mandating all members of the military to get a Covid-19 vaccine and discharging those who refuse – even on religious grounds – in what amounts to a deliberate purge of troops with beliefs the current Pentagon considers wrong, a sergeant and two officers told the podcast hosted by Republican congressman Matt Gaetz on Thursday.

Gaetz (R-Florida), who hosts the podcast called ‘Firebrand,’ said he wants to propose an amendment that would ban mandates for experimental vaccines and restore rank and pay to those forced to leave the military, but admitted that some of his Republican colleagues might not support it, not to mention the majority Democrats.

“If you are a believer and you are listening to this podcast, you need to understand that God-fearing service members are being intentionally purged from the services,” said one of his guests, Air Force Captain Jordan Karr.

As a House Armed Services Committee member, I'll be introducing National Defense Authorization Act amendments to ban mandates for experimental COVID-19 vaccines and restore rank & pay for anyone who was forced or coerced to leave the military as a consequence of these vaccines. pic.twitter.com/r21lTido4n

“It’s a purposeful purge,” argued Army Major Samuel Sigoloff. “Anyone who would disobey an unlawful order is being purged out of the military,” he added, alleging there is a “shadow policy” in place to protect the leadership doing this.

Karr, Sigoloff and Air Force Master Sergeant Nickolas Krupper made their case against the mandate by bringing up religious freedom, natural immunity, and the discrepancy between the jabs used under emergency authorization and the one officially approved, which technically isn’t available in the US.

Though they are legally distinct, the Food and Drug Administration (FDA) guidance says that Pfizer’s emergency-use vaccine and the officially approved Comirnaty “can be used interchangeably… without presenting any safety or effectiveness concerns.”

All three service members face “involuntary separation” over their refusal to get the jab, but have sued the Defense Department on religious exemption grounds. They technically remain on active duty until the lawsuits are resolved. Sergeant Krupper pointed out he is two years away from retirement and would lose his pension and family medical benefits if the USAF kicks him out.

About 3,400 troops have been fired for refusing the jab this year, service heads in charge of personnel told the Senate Armed Services Committee on Wednesday. Only the US Navy has elected to honorably discharge its sailors, allowing all 798 of them to keep their benefits.

The Marine Corps accounted for nearly 2,000 separations, making up nearly 1% of its total strength of 215,000.

Lieutenant-General David Ottignon, deputy commandant for manpower and reserve, insisted this had “no operational impacts across the force for readiness,” however. “There’s no one community that has signaled an instance where a [leader], an NCO or another enlisted Marine is not present because of that,” he told lawmakers.

While Gaetz wondered if the vaccine mandate would harm recruiting going forward, the generals said any troop shortages were due to a “rising economy” and low unemployment rate, according to the Military Times. The US GDP actually shrank by 1.4% in the first quarter, according to figures published Thursday, which the Biden administration blamed on the conflict in Ukraine.