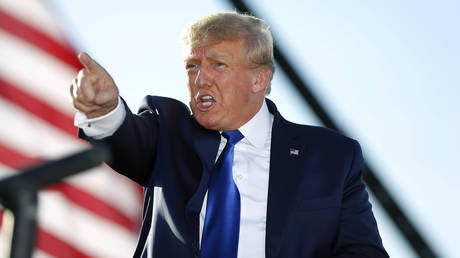 Former President Donald Trump told British broadcaster Piers Morgan that were he in charge of the US, he’d tell his Russian counterpart, Vladimir Putin, that he couldn’t say the word “nuclear” ever again. Amid the conflict in Ukraine, Trump has swung between issuing nuclear threats and calling for negotiations.

“Putin uses the ‘N-word’…the nuclear word, all the time,” Trump told Morgan, in a clip from an interview set to air on Monday. “That’s a no-no, you’re not supposed to do that. He uses it on a daily basis. And everybody’s so afraid… And as they’re afraid, he uses it more and more. That’s why he’s doing the kind of things he’s doing right now.”

Putin has not directly threatened the West with nuclear weapons, but in a speech marking the launch of Russia’s military operation in Ukraine in February, cautioned that anyone who “tries to stand in our way” will face consequences “such as you have never seen in your entire history.” Before the operation, he told French President Emmanuel Macron that a war between Russia and NATO would be one with “no winners,” presumed by many to be a reference to the destructive power of nuclear arms.

Trump, however, told Morgan that he’d wave America’s own nukes at Putin. “I’d say ‘we have far more than you do, far more powerful than you, and you can’t use that word ever again.”

“You cannot use the nuclear word ever again, and if you do, we’re gonna have problems,” Trump continued, without elaborating.

Previous statements by Trump have been even more direct, with the former president telling Fox News in March that he’d send nuclear-armed submarines “coasting back and forth, up and down [Russia’s] coast.”

However, Trump’s messaging on the current conflict has been inconsistent. After proclaiming that he’d threaten Russia with nuclear missiles, he called last week for a negotiated end to the conflict in Ukraine, stating that it “doesn’t make sense that Russia and Ukraine aren’t sitting down and working out some kind of an agreement,” adding that “there is a solution, and it should be figured out now – not later – when everyone will be DEAD!”

Fears of nuclear war have likely influenced the Western response to the Ukraine conflict. While NATO states and the EU have targeted Russia with unprecedented economic sanctions and funnelled billions of dollars worth of arms to the Zelensky regime in Kiev, the West has not sent troops to the conflict, nor have Western powers imposed a “no-fly zone” for fear of a direct conflict with Russia. US President Joe Biden has stated that such a conflict would spiral into a “third world war.”

According to the Pentagon’s most recent Nuclear Posture Review, American nukes are intended to serve as a deterrent to nuclear attack on the US and its allies, but their use may also be considered in “extreme circumstances to defend the vital interests of the United States or its allies and partners.”

Russia, which possesses around 700 more nuclear warheads than the US, asserts that it could use nuclear weapons in the event of a first nuclear strike on its territory or infrastructure, or if the existence of the Russian state is threatened by either nuclear or conventional weapons.