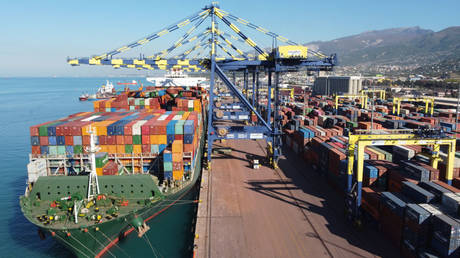 Turkey and Russia have signed a roadmap for economic cooperation that envisages bringing bilateral trade turnover to $100 billion a year, Turkish President Recep Tayyip Erdogan told the press on Saturday.

“During our bilateral meeting, we exchanged views on the further development of our trade and economic cooperation… Our goal in trade is $100 billion dollars. In this regard, we want to develop our cooperation in areas such as energy, trade, tourism and agriculture. We are determined to ensure a more balanced volume of bilateral trade.

A memorandum of understanding, a kind of a roadmap for our trade and economic relations, was signed in Sochi by our trade minister and Russian Deputy Prime Minister Alexander Novak,” Erdogan told reporters in Ankara upon his return from Sochi, where he met with Russian President Vladimir Putin.

Turkey and Russia have also agreed to introduce the Russian ruble as a currency for bilateral trade, Erdogan said.

“We agreed on the ruble as a [monetary] unit in trade. Since we will conduct our trade in rubles, this will of course be a serious source of income for both Turkey and Russia. In addition, there is the ‘Mir’ card [Russian analogue of Visa]. Five of our banks currently accept it. There is very serious progress in this issue, which will ultimately improve conditions for tourists coming from Russia. They will be able to do shopping and pay for hotels,” Erdogan said.

According to the Turkish president, during his visit to Russia representatives of the two countries’ central banks held talks on further enhancing mutual cooperation. He did not specify what specifically was discussed at the meetings, however.

On Friday, Putin and Erdogan spent over four hours discussing a broad range of issues, from Ukrainian grain exports and trade cooperation to Russian gas exports.

They agreed to “meet halfway” when it comes to the two countries’ needs in trade and energy, according to the joint statement. Following the talks, the Russian president praised the fact that trade volumes between Russia and Turkey are steadily growing, having soared by nearly 60% last year and doubling in the first five months of 2022.