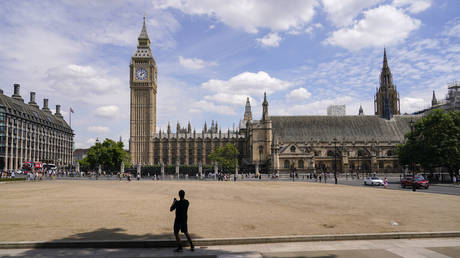 Six candidates remain in the running to succeed Boris Johnson

Tory MPs held their first round of voting to elect a new leader on Wednesday, with Sir Graham Brady of the Conservative 1922 Committee announcing the results in the afternoon.

Zahawi and Hunt secured just 25 and 18 votes, respectively, placing them in the last two places among the eight candidates, thus ending their hopes of becoming prime minister.

Currently serving as chancellor of the Exchequer since a cabinet reshuffle earlier this month, Zahawi had promised to slash taxes and lower energy bills if made PM. Hunt, who ran for leadership of the party in 2019 but finished second to Boris Johnson, had served as foreign secretary between 2018 and 2019. He had promised similar tax cuts, while both men also promised to hike military spending.

Sunak came out on top during the first round of voting, securing the support of 88 MPs. He has pitched himself as a voice of fiscal prudence and the best equipped to steer Britain’s economy through the headwinds it currently faces. Like Zahawi and Hunt, though, he is a proponent of higher military spending.

While Sunak resigned from Johnson’s cabinet earlier this month – handing his duties as chancellor over to Zahawi – he has been implicated in some of the same scandals as his former boss, and was fined by London’s Metropolitan Police in April for breaching his government’s own Covid-19 lockdown laws.

In second and third place, respectively, are junior trade minister Penny Mordaunt with 67 votes and Foreign Secretary Liz Truss with 50. Mordaunt and Truss are both prominent Brexiteers, while Truss has been one of the most outspoken anti-Russia voices in Europe since the conflict in Ukraine began in February, promising in a recent newspaper op-ed to inflict “real pain on Putin and the Kremlin” if elected.

The six candidates still in the race will now face successive rounds of voting with one contender eliminated after every round. When only two remain, a leader will be chosen by a postal vote involving every member of the Conservative Party. Despite standing down as leader of the party last week, Johnson will remain prime minister until his successor is appointed.