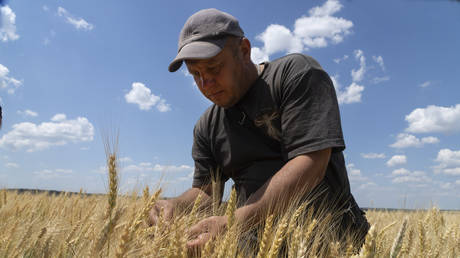 UN Secretary-General Antonio Guterres on Wednesday praised Ukrainian and Russian negotiators for reaching a provisional agreement on getting grain shipments out of Ukraine via the Black Sea, and called for more dialogue between the sides.

Shortly before Guterres spoke, negotiators from Russia, Ukraine, Turkey and the UN met in Istanbul and agreed to set up a joint coordination center in the Turkish city to oversee the shipments. Turkish Defense Minister Hulusi Akar told reporters that all parties agreed “on technical issues such as joint controls at the destination points and…the safety of navigation,” and would meet again in Turkey next week before signing a formal deal.

Guterrez described the move as “a ray of hope to ease human suffering and eliminate hunger,” referring to the reliance of the developing world on food and fertilizer exports, which have been disrupted.

“Of course, this was a first meeting, but the progress was extremely encouraging. We hope that the next steps will allow us to come to a formal agreement,” the UN chief added.

Peace discussions between Russia and Ukraine have been at an impasse since March, and Guterrez said that while there is “a long way to go” before a negotiated settlement to the conflict is reached, Wednesday’s grain talks “demonstrated that the parties are able to have a constructive dialogue.”

The ongoing conflict in Ukraine has stalled grain exports from the country, placing “hundreds of millions of people in developing countries, including in sub-Saharan Africa” at risk of starvation, Guterres warned last month. While Kiev and its Western backers have accused Russia of blockading Ukraine’s Black Sea ports, Moscow has insisted that it is ready to provide safe passage for ships carrying grain, and has blamed the stoppage on Ukraine’s mining of sea routes.