‘Up to Ukraine’ to decide on attacking Russia, says US 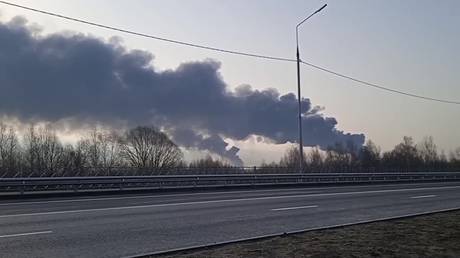 Washington supports “whatever is necessary” for Kiev to win the conflict with Russia, says top diplomat Blinken

It is up to Ukraine to decide whether to expand the conflict with Russia beyond their own borders, US Secretary of State Antony Blinken told the Senate on Wednesday. His comments come after Moscow condemned a senior British official who said it would be “legitimate” for Kiev to use NATO-supplied weapons to attack Russian territory.

“We are determined to get them what they need to deal with this Russian aggression and to push the Russians out of the country. It’s another matter as to whether the Ukrainians should take actions that go beyond their borders,” Blinken said on Wednesday afternoon, at a hearing before the Senate Appropriations Committee considering the State Department’s 2023 budget.

“My own view is that it’s vital that they do whatever is necessary to defend against Russian aggression and the tactics of this are their decisions, but what we are doing with all of these systems is making sure the Ukrainians have the means to defend themselves, that’s what this is about, and making sure that they can do whatever is necessary to push the Russians out of the country,” he added.

“London’s direct provocation of the Kiev regime to such actions, should they attempt to do so, will immediately lead to our proportional response,” the Russian military said. “As we have warned, the Russian armed forces are on standby around the clock to retaliate with long-range high-precision weapons against decision-making centers in Kiev.”

Heappey had told Times Radio it would be “completely legitimate” for Ukraine to target “Russia’s depth in order to disrupt the logistics that if they weren’t disrupted would directly contribute to death and carnage on Ukrainian soil.”

Authorities in the Russian regions of Voronezh and Kursk, which border Ukraine, reported on Wednesday that air defenses engaged and shot down what they said were Ukrainian drones. Police in the Belgorod Region also arrested two men suspected of preparing a terrorist attack on transportation infrastructure on behalf of Ukraine.

Meanwhile, authorities in the self-proclaimed republic of Transnistria – the primarily Russian-speaking region between Ukraine and Moldova – reported incursions by drones and shots fired from Ukrainian territory.

Speaking with Russian lawmakers on Wednesday, Russian President Vladimir Putin said that any outside intervention in the conflict would be met with a swift response.

“If someone decides to intervene in the ongoing events from the outside and create unacceptable strategic threats to us, they should know that our response to those oncoming blows will be swift, lightning-fast,” Putin said.

“We have all the tools to do this,” he added. “We’ll use them if such a need arises.”

Russia attacked the neighboring state following Ukraine’s failure to implement the terms of the Minsk agreements, signed in 2014, and Moscow’s eventual recognition of the Donbass republics of Donetsk and Lugansk. The German and French brokered Minsk Protocol was designed to give the breakaway regions special status within the Ukrainian state.