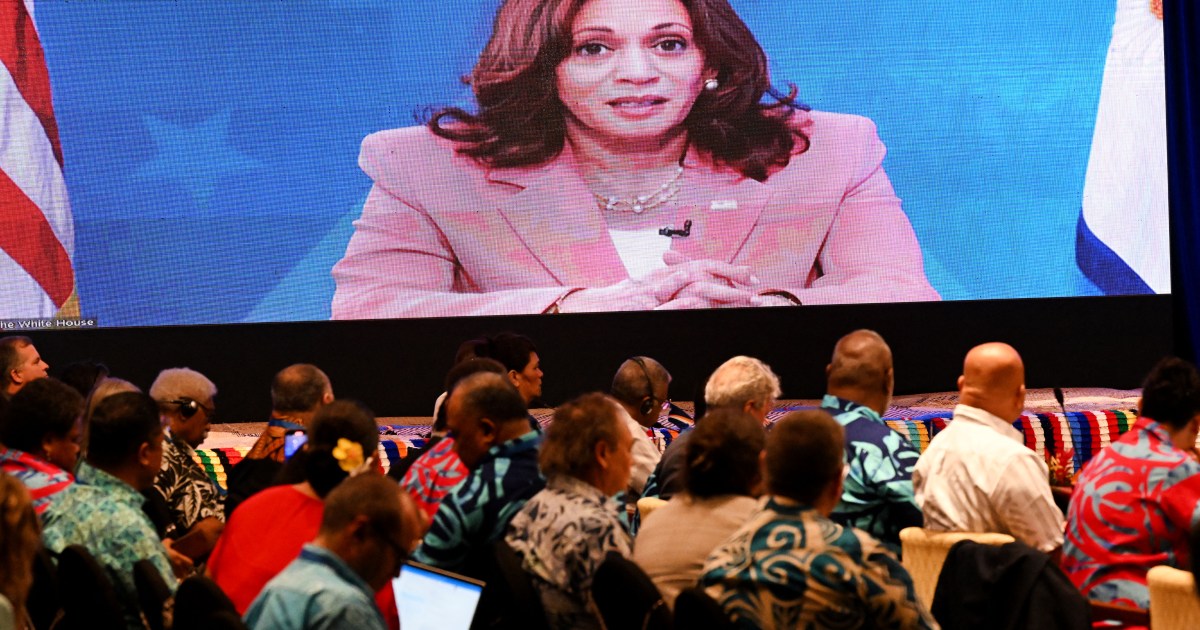 The United States has unveiled a major push into the Pacific region, seeking to counter China’s growing influence, with Vice President Kamala Harris announcing $600 million in funding at a key regional summit.

In a video address to the Pacific Islands Forum (PIF) in Fiji on Wednesday, Harris also said the US would open two new embassies – in Tonga and Kiribati – and appoint its first-ever envoy to the Pacific.  It has already announced plans to reopen its embassy in the Solomon Islands.

The US vice president thanked Fiji for inviting her to speak at the summit and said the US was ready to “embark on a new chapter” in the Pacific.

Harris said she and US President Joe Biden acknowledged the region may not have received enough focus in the past.

“We are going to change that,” she promised, adding the US wanted to “significantly deepen our presence in the Pacific region”.

The aid – $60 million each year over a decade – represents a tripling of current assistance and will be channelled towards measures to enhance maritime security, tackle climate change and combat illegal fishing. The US will relaunch its Peace Corps programme in the Pacific.

“It really shows the US are back and want to play an active role,” Palau President Surangel Whipps Jr told Reuters news agency after Harris’s speech.

“Sometimes because of our remoteness we get forgotten, so this was important.”

Ahead of the speech, a US administration official had told reporters the US would be “stepping up our game in the Pacific Islands”.

The US moves come as China boosts economic and political links with Pacific island nations, signing a security pact with the Solomon Islands in April that heightened concern not only in the US but also in Australia and New Zealand.

The PIF meeting, which brings together leaders from across the region, was the first since the deal was signed.

Harris’s address was a diplomatic coup for the US, with China not yet invited to make a similar appearance at the summit.

At least one official from the local Chinese embassy was in the room for Harris’s address, causing a minor stir among organisers.

Tonga said it was happy to hear that the US would be opening an embassy in the country for the first time.

“It is a big milestone,” Tongan Prime Minister Siaosi Sovaleni told the AFP news agency. “We are very happy we are finally having a US presence in Tonga.”