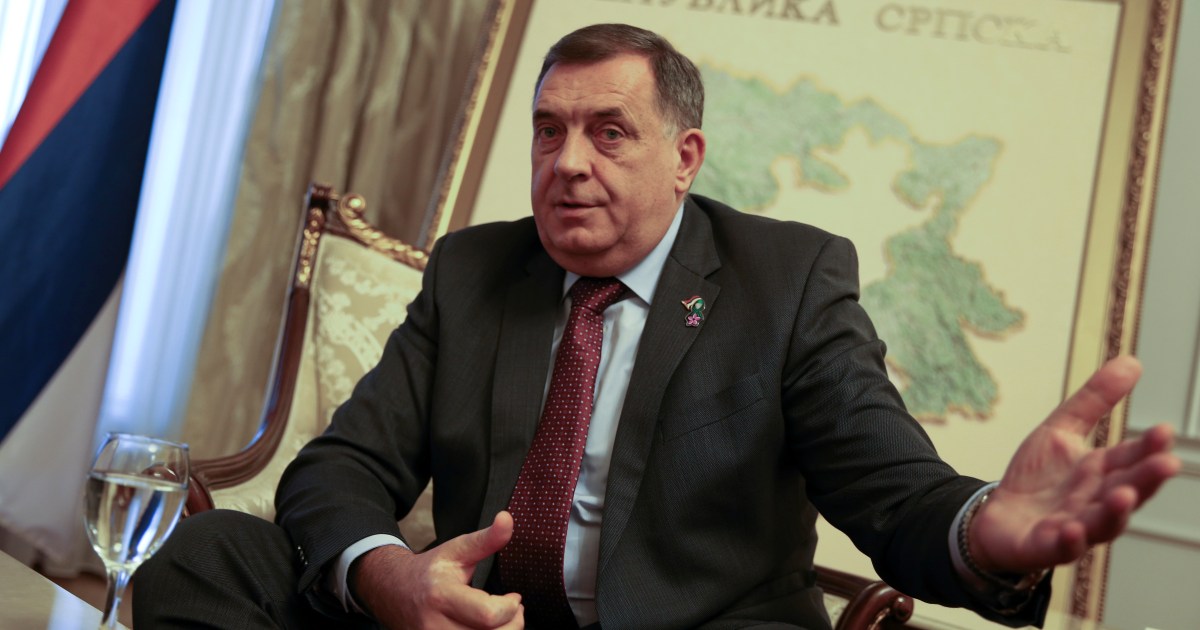 The United States accuses Bosnian Serb leader Milorad Dodik of corruption and threatening the stability of Bosnia and Herzegovina.

The United States has imposed sanctions on Bosnian Serb leader Milorad Dodik, who aims to take the Serb Republic out of Bosnia’s armed forces, accusing him of corruption and threatening the stability and territorial integrity of Bosnia and Herzegovina.

In a statement on Wednesday, the US Department of the Treasury said the sanctions against Dodik come as part of an effort by the administration of President Joe Biden to hold accountable individuals who “undermine the stability of the Western Balkans region through corruption and threats to long-standing peace agreements”.

The Treasury also slapped sanctions on media outlet Alternativna Televizija d.o.o. Banja Luka, accusing Dodik of acquiring it to further his own agenda and exerting personal control over it.

“Milorad Dodik’s destabilizing corrupt activities and attempts to dismantle the Dayton Peace Accords, motivated by his own self-interest, threaten the stability of Bosnia and Herzegovina and the entire region,” Under Secretary of the Treasury for Terrorism and Financial Intelligence Brian E Nelson said in the statement.

“The United States will not hesitate to act against those who pursue corruption, destabilization, and division at the expense of their own people, as well as against those who enable and facilitate this behavior.”

The designations are the first use of an executive order issued in June allowing the US to target those threatening peace or stability in the Western Balkans. They will block any assets Dodik may have under US jurisdiction and criminalise transactions with him under US law.

The US-brokered Dayton Peace Agreement of 1995 ended three and a half years of war in Bosnia. The conflict left approximately 100,000 people dead and forced two million others from their homes.

The agreement also established Bosnia and Herzegovina as a state composed of two entities: a Bosniak-Croat-dominated federation and a Serb-run Republika Srpska.

But in recent months, Bosnia has faced its worst political crisis since the 1990s, after Bosnian Serbs blocked the work of the central government and Dodik threatened to withdraw from state institutions, including the army, the judiciary and the tax system.

Dodik is the Serb member of the tripartite Presidency of Bosnia and Herzegovina, which rotates every eight months between a Bosniak, Serb and Croat member. He has threatened the secession of Republika Srpska for 15 years.

Amid the Serb blockade of state institutions, Bosnia’s international peace envoy Christian Schmidt said in late October that it was “unacceptable to undo achievements of the past 26 years”.

Any unilateral undoing of state institutions would be a “very serious setback” for Bosnia, Schmidt said at the time.

Meanwhile, separately on Wednesday, the US Department of State barred two former and current Bosnian officials from entering the country, accusing them of “involvement in significant corruption”.

Former Bosnia and Herzegovina High Judicial and Prosecutorial Council President Milan Tegeltija and the president of the Movement for Democratic Action (PDA) and parliamentary assembly representative, Mirsad Kukic, were blacklisted.

Among other things, the State Department accused Tegeltija of using his political influence for personal benefit, as well as manipulating judicial appointments, while it accused Kukic of misappropriating public funds for his own benefit.

“Their actions undermined the rule of law, the public’s faith in their government’s democratic institutions and public processes, and peace and prosperity for [Bosnia and Herzegovina] citizens,” the department said.