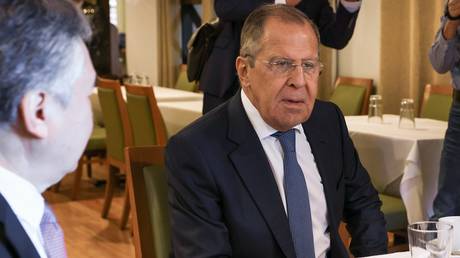 Washington is perilously close to being openly involved in the conflict in Ukraine, Russian Foreign Minister Sergey Lavrov said in an interview with Newsweek published on Wednesday, answering a question about a possible confrontation between nuclear-armed world powers.

The US and its allies aren’t seeking peace in Ukraine, but to use the country to inflict a strategic defeat on Russia, said Lavrov, who was in New York for the 77th UN General Assembly session.

“Today, Western states funnel weapons and military hardware into the neo-Nazi regime in Kiev, and train Ukraine’s armed forces. NATO and US weapons are used to fire at Russian territory bordering Ukraine, killing civilians there. The Pentagon does not hide that it’s providing Kiev with intelligence and target designations for strikes. We’ve recorded the presence of American mercenaries and advisers on the battlefield,” Lavrov told the US magazine.

The United States, in fact, is teetering on the brink of turning into a party to the conflict. This is to your question about the risk of a direct collision between nuclear powers.

Russian President Vladimir Putin warned the West on Wednesday morning that Moscow would “use all the means” at its disposal to defend Russia, referring to statements by officials in NATO countries about using nuclear weapons against Russian troops.

The US and its allies are openly seeking to defeat Russia on the battlefield and are ready to sacrifice Ukraine to achieve their geopolitical goals, Lavrov told Newsweek.

When Moscow and Kiev almost reached an agreement in March, this turn of events “obviously frightened the Americans and the British, so they actually forbade Ukraine to conduct further dialogue with Russia,” the Russian diplomat said. This was presumably a reference to revelations by pro-government media in Kiev that UK Prime Minister Boris Johnson had brought such a message to Ukrainian President Vladimir Zelensky.

“It is objectively not possible to maintain normal communication with Washington” after the US declared “the strategic defeat of Russia” as its policy goal, Lavrov told the outlet.

The West left Moscow no choice but to launch a special military operation, after it created and nurtured “a Russophobic neo-Nazi regime” in Kiev and sent weapons into Ukraine in order to turn it into a “springboard for containing Russia,” the foreign minister explained.

The goals of the operation are to protect the population of Donbass, eliminate threats to Russia’s security, and the “demilitarization and denazification of Ukraine,” Lavrov said. “All of them remain relevant and will be achieved, no matter how long it takes.”