US vows to help Taiwan 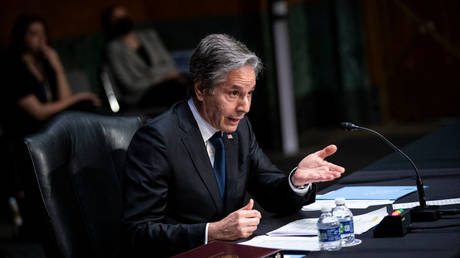 Washington is doing everything in its power to ensure that Taiwan can withstand any potential attack, by supporting its indigenous military industry, expediting “third-party transfers,” and helping the island boost its “asymmetric” deterrence capabilities, Secretary of State Antony Blinken has said.

“When it comes to Taiwan itself, we are determined to make sure that it has all necessary means to defend itself against any potential aggression, including unilateral action by China to disrupt the status quo that’s been in place for many decades,” Blinken said on Tuesday in a testimony to the Senate Foreign Relations Committee.

Blinken noted that the US has made or facilitated nearly $20 billion in arms sales and $2.5 billion in direct commercial sales to Taiwan since 2017. “We’ve been expediting third-party transfers to Taiwan,” he added. “We’ve been supporting indigenous industrial defense capability. And we are focused on helping them think about how to strengthen asymmetric capabilities, again as a deterrent.”

“If, in fact, China could overwhelm and take Taiwan and now have control of 90% of the world’s semiconductors, the world would be in a world of hurt,” Menendez said. He added that failing to come to Taiwan’s aid would send a message to US allies and would-be allies in the region, which would say, “‘Well, if they didn’t do it for Taiwan, they’re not going to do it for us’.”

Blinken agreed and noted that Washington has a technological advantage over Beijing on the most advanced semiconductors. He said President Joe Biden’s administration was working with Taiwan, Japan, the Netherlands and other countries to “make sure that when it comes to the highest-end semiconductors that they are not transferred to China or China does not get the technology to manufacture them. Taiwan is integral to that.”

US relations with China have worsened since Russia launched its military offensive against Ukraine in February, as Washington has been unable to persuade Beijing to help Western powers punish and isolate Moscow. In Tuesday’s hearing, Blinken told senators that China is “paying a reputational cost,” especially in Europe, for “sitting on the fence when it comes to Russian aggression against Ukraine.”

China has blamed the US and its NATO allies for instigating the Ukraine crisis by breaking promises against expanding the alliance eastward after the Soviet Union collapsed in 1991, and it has called for peace talks to end the conflict. With NATO members sending billions of dollars in weapons to Ukraine for use against Russian forces, Chinese Foreign Ministry spokesman Wang Wenbin called on Tuesday for restraint and de-escalation.

“No one wants to see the outbreak of a third world war,” Wang said. He also rebuked Western powers for criticizing China’s policies, saying Washington is guilty of war crimes, economic coercion and betraying allies. “Facts have proven that the US is the biggest spreader of disinformation, culprit of coercive diplomacy and saboteur of world peace and stability,” he said.

Blinken’s latest comments on Taiwan likely won’t help mend fences with Beijing, which considers Taiwan to be a breakaway province of China. The US has maintained a ‘One China’ policy, under which it acknowledges but doesn’t endorse Beijing’s claim of sovereignty over Taiwan. Chinese officials have repeatedly warned against US meddling in Taiwan, saying they will take steps to defend their nation’s territorial integrity.