Wimbledon bosses attempt to explain why they banned Russians (VIDEO) 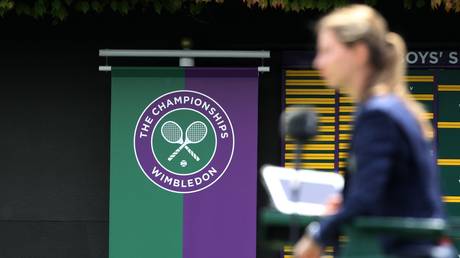 The All England Lawn Tennis Club detailed the controversial decision

Wimbledon organizers have further explained their motives for the ban on Russian and Belarusian players this summer, denying that the ruling is discriminatory.

The All England Lawn Tennis Club (AELTC) announced its controversial move last week as a reaction to Russia’s military operation in Ukraine, despite the women’s WTA and men’s ATP tours allowing Russian and Belarusian players to compete under neutral status.

Amid criticism from the likes of the ATP, WTA, and men’s icon Novak Djokovic, the AELTC’s chairman Ian Hewitt spoke further on the topic as Wimbledon announced plans for its upcoming 135th edition and the next 100 years.

When asked if the decision to ban Russian players was discriminatory at a press conference on Tuesday, Hewitt first refused to give a direct answer and said: “We believe that we have taken the right decision, which is the proper decision for Wimbledon in the whole circumstances, and I don’t think I want to speculate on particular courses of action or the like.”

Then pushed to respond to the question, Hewitt answered: “It is not discrimination in the form that is being said. It is a considered view reached as to what is the right and responsible decision in all the circumstances.”

Before that, as part of a prepared statement, Hewitt said the AELTC believes “this is an extreme and exceptional situation that takes us far beyond the interests of tennis alone” while noting that “government, industry, sport and creative institutions are all playing their part in efforts to limit Russia’s global influence including any benefit from trade, cultural or sporting shows of strength”.

“As part of that response, the UK Government has set out directional guidance for sporting bodies and events in the UK, with the specific aim of limiting Russia’s influence,” Hewitt continued.

“We have taken that directional guidance into account, as we must as a high-profile event and leading British institution. For clarity, it does not allow for automatic entry to Wimbledon based on rankings alone.”

Hewitt claimed that the decision was made “after careful consideration against a variety of factors” which led the AELTC to “two firm conclusions.”

“First, even if we were to accept entries from Russian and Belarusian players with written declarations,” as suggested by UK Sports Minister Nigel Huddleston, “we would risk their success or participation at Wimbledon being used to benefit the propaganda machine of the Russian regime – which we could not accept,” Hewitt said.

“Second, we have a duty to ensure that no actions we take should put the safety or welfare of players, or their families, at risk.”

Hewitt regretted the impact the decision will have on every individual affected, such as top 10 players including Daniil Medvedev and Andrey Rublev, but stressed that the AELTC believed it had made “the most responsible decision possible in the circumstances”.

“There is no viable alternative within the framework of the Government’s position to the decision we have taken in this truly exceptional and tragic situation,” Hewitt claimed.

Hewitt then said that the AELTC “can recognize that there’s many players who will be affected by this”, and “sincerely” hoped that the player community will recognize “the very challenging position we are in, the reasons for our decision, and that this is not an easy option”.

“We hope that in time they can understand our desire to achieve a safe and responsible outcome,” he added.

Hewitt’s remarks will do little to quell the disappointment of the likes of Rublev – who called the ruling “completely discriminatory” – or earn the approval of Djokovic, who said it was “crazy”.

“We have rules against discrimination in tennis. We play based on rankings, not nationality,” Djokovic stressed, while also remarking that “when politics interferes with sport, the result is not good” in separate comments made at the recent Serbia Open.

Elsewhere, Nikola Pilic, who has a famous tennis academy that Djokovic spent almost five years in on his road to becoming an all-time great, suggested that some players could boycott the English grand slam in a show of unity.

“Politics has gone too far into sport and I think this situation could be very similar to that of ’73,” Pilic also predicted, while calling British Prime Minister Boris Johnson “crazy” to Ubitennis.

“In the sense that, someone might say: ‘if these tennis players don’t play, we don’t play either!’ and, at that point, I’d be curious to see what Wimbledon’s reaction would be,” concluded the leader of an 81-player protest in the mid-70s when in a dispute with the Yugoslav Tennis Federation.

Also on Tuesday, however, unvaccinated Djokovic received confirmation that he will be able to defend his crown at SW19 after it was announced that all Covid restrictions will be lifted at the competition.

This will avoid a repeat of Djokovic’s Down Under ordeal, when his vaccine status saw him deported and prohibited from playing at the Australian Open won by Nadal in a final against Medvedev.

With the absence of Russian and Belarusian players, Wimbledon will get underway on June 27.