With Mariupol almost under full Russian control after weeks of bombardment, those who have escaped the southern Ukrainian city share chilling accounts of being held in cramped, unclean, processing camps before being evacuated.

Oleksandr and Olena are queuing for coffee at a food kitchen just days after escaping from Mariupol.

They are two of the lucky few who managed to flee the city last week. Aside from the Ukrainian forces inside the Azovstal steel works, Mariupol is almost completely under Russian control and is effectively sealed off from the rest of the world.

Any information about the conditions inside the city for the 100,000 civilians still thought to be trapped there is sporadic and difficult to confirm independently.

The couple, who have arrived in the relatively safe western city of Lviv, tell us about surviving inside the city during the fighting. But their experience of one of Russia’s so-called filtration camps, the centres reportedly set up outside Mariupol to hold civilians before they are evacuated, is every bit as chilling.

Oleksandr and Olena say they ended up at a centre when they tried to escape the city. After walking 3km (1.9 miles) from their home to an evacuation point, they were driven to a Russian refugee hub at a former school in the village of Nikolske, north-west of Mariupol.

“It was like a true concentration camp,” Oleksandr, 49, says.

The centres have been compared by Ukrainian officials to those used during Russia’s war in Chechnya, when thousands of Chechens were brutally interrogated and many disappeared.

Oleksandr and Olena were fingerprinted, photographed from all sides, and interrogated for several hours by Russian security officers – “like in a prison”, he says. They worried that the Russians would look at their phones, and so they cleared all evidence from their devices of anything to do with Ukraine – including photos of their daughter in front of a Ukrainian flag.

They were right to worry. Oleksandr says that during their interrogation, Russian security officers examined photographs, phone call history and contact numbers on their devices for links with journalists or government and military officials.

“If a person was suspected of being a ‘Ukrainian Nazi’, they took them to Donetsk for further investigation or murder,” says Oleksandr, although the BBC has not been able to verify this claim. “It was very dangerous and risky. Any small doubt, any small resistance – and they could take you to the basements for interrogation and torture. Everybody was afraid to be taken to Donetsk.”

President Vladimir Putin has stated one of the aims of his invasion is to clear Ukraine of Nazis, and Russian propaganda has made numerous baseless allegations that Ukraine is somehow aligned with Nazism.

As they waited to be processed in a camp, some men offered Oleksandr and Olena a way to escape Mariupol without going through filtration. But the couple were terrified these could be Russians or collaborators.

“We were afraid of them,” Olena says.

Eventually they were detained and put on a list for evacuation. But the ordeal did not stop there.

“You can’t imagine how horrible the conditions were in this filtration camp,” Olena tells us. Elderly people slept in corridors without mattresses or blankets. There was only one toilet and one sink for thousands of people, she says. Dysentery soon began to spread. “There was no way to wash or clean,” she says. “It smelt extremely awful.”

Soap and disinfectant ran out on the second day they were there. Soon, too, did toilet paper and sanitary pads.

After their interrogation, Olena and Oleksandr were told they had permission to leave on the 148th evacuation bus. But a week later, just 20 buses had left the facility. In contrast, there were many buses organised to go to Russian territory. Authorities even tried to force the couple on to a coach heading east, they say. In the end Olena and Oleksandr felt compelled to seek the help of those who had secretly offered them transport out when they arrived.

“We didn’t have any choice – either be forcibly deported to Russia or risk it with these private drivers,” Olena says.

It’s a dilemma that Mariupol’s mayor, Vadym Boychenko, recognises. “Many buses of civilians go to Russian rather than Ukrainian territory,” he told the BBC, over the phone. “From the beginning of war, [the Russians] didn’t allow any way to evacuate civilians. It’s a direct military order to kill civilians,” he claimed.

Oleksandr and Olena’s driver managed to get them from their filtration camp to the Russian-occupied city of Berdyansk – through “fields, dirt roads, narrow pathways behind all the checkpoints”, Olena says, because they didn’t have the proper documents to pass a Russian inspection.

They then spent three days looking for a route out before finding another driver who was willing to risk everything to get them to Ukrainian-controlled territory. He managed to get around 12 Russian checkpoints and safely deliver them to Zaporizhzhia. The couple then took an overnight train to Lviv.

“From filtration camps you can only escape using these risky local private drivers,” Oleksandr says. “Fortunately, there are good people among them.”

Arriving in Lviv on the same day were Valentyna and her husband Evgeniy. They also managed to flee Mariupol last week. They were boarding a coach to a smaller city in western Ukraine – desperate for safety after their ordeal.

The filtration process was speedy for them, says Valentyna, 58, perhaps because of their age and because Evgeniy has a disability. But it was far worse for younger people, she said.

“The filtration camps are like ghettos,” she says. “Russians divide people into groups. Those who were suspected of having connections with the Ukrainian army, territorial defence, journalists, workers from the government – it’s very dangerous for them. They take those people to prisons to Donetsk, torture them.”

She and Evgeniy also say many were sent from the filtration camps to Russia. Sometimes people were told they were destined for Ukrainian-controlled territory, they say, only for the coach to head to Russian-held territory instead.

Like Oleksandr and Olena, Valentyna says it was only because of their driver that they managed to escape.

“When we finally [escaped] and saw the Ukrainian fighters and the flag, when we heard Ukrainian language, everyone in the bus started to cry,” she said. “It was just unbelievable that we stayed alive and finally fled from hell.”

The couples’ harrowing time in the camps came after weeks living through the battle of Mariupol.

Russian forces encircled and bombarded the city, slowly advancing street by street. Their eventual occupation has made it difficult to verify the conditions inside. It’s only through interviews with recent escapees, such as Valentyna, Oleksandr and Olena, that details have started to emerge.

There was no running water for many and food became desperately scarce. Oleksandr and Olena sheltered in a basement near a restaurant, and so were able to survive on the tinned goods kept in storage there, with the head chef preparing food for those who needed it.

The problem, however, was water. Oleksandr describes how he had to run outside to wells in order to stock up.

“It was very dangerous, because the Russians were shooting all the time,” he said. Boiler water saved our lives. When we left the basement to try to evacuate, there was almost no water left in our boiler.”

Valentyna and Evgeniy recount how it was impossible to get any food except what people had saved before the war began. They survived on tinned goods, cereals, and the few potatoes they grew in their garden, sharing what they had with their neighbours. 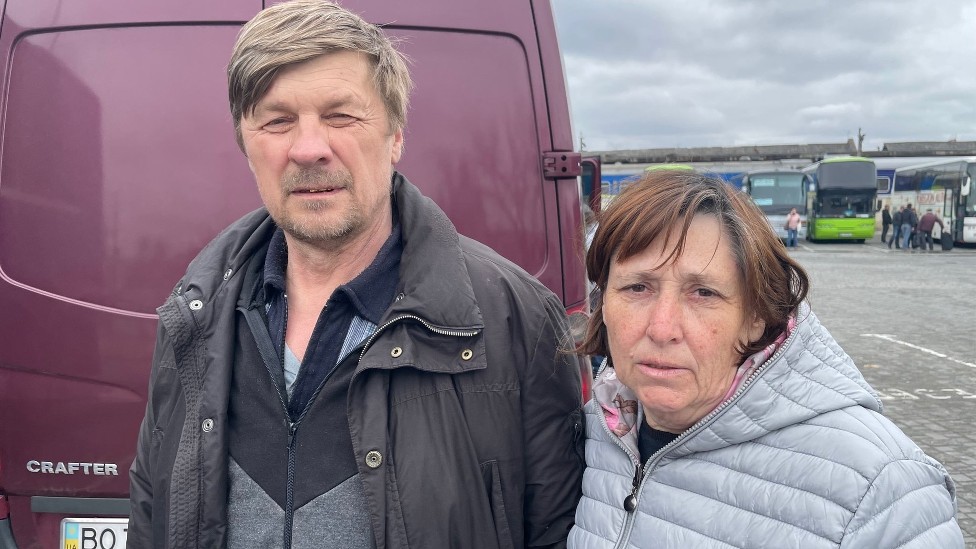 The pair did not risk a run to the wells, knowing the dangers there. When snow came, they were ecstatic – gathering it to melt over outside fires, for drinking water.

The Russians had supplies and “some people were going to take food from [them], those who couldn’t stand hunger,” Valentyna said. “As for me, I wouldn’t take any food from those monsters. I would rather die.”

She reserves special hatred for troops under the command of the Chechen Republic, an autonomous region of Russia loyal to Vladimir Putin. These militants have been fighting in Ukraine since the start of the invasion and are reported to have been heavily involved in the siege of Mariupol.

Valentyna accused their forces of hunting down women and children in order to rape them. “If these girls and women refuse to do that they simply killed them,” she said. “I can’t believe that people can be such animals. No humanity, no compassion.”

Valentyna and Evgeniy say they survived by hiding in their basement in the north of the city. They went outside only to make fires, risking shelling and shrapnel for food and warmth. Eventually their basement was also destroyed in a Russian bombardment. Evgeniy was concussed and has had hearing problems since. Their neighbour was also badly injured.

They moved between shelters and basements, before deciding they would try to flee. As they made their way out of the city they saw the devastation wrought by the Russian invaders.

“I myself saw black, burnt, empty high-rising buildings, which were totally destroyed,” Valentyna says. “There were an enormous number of bodies. The city does not exist anymore. Even walls. Just huge piles of ruins. I could never have imagined such violence.”

Both couples have now escaped Mariupol, a city that has become a symbol of the resistance and the suffering of Ukraine after the Russian invasion. Now they face an uncertain future – just four of the 11 million Ukrainians displaced by the conflict.