Zelensky angered by lack of help from EU 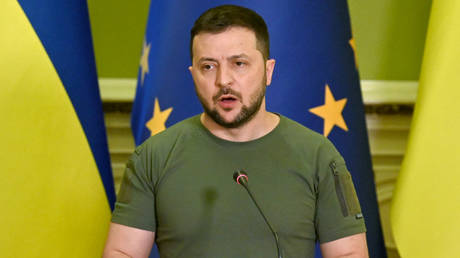 Withholding €8 billion in financial aid is either “a crime or a mistake” by Brussels, the Ukrainian leader says

Ukrainian President Vladimir Zelensky has lashed out at the EU, accusing the bloc of deliberately withholding €8 billion ($8.18 billion) in aid promised to his country amid the conflict with Russia.

“Every day and in different ways, I remind some EU leaders that Ukrainian pensioners, our displaced persons, our teachers and other people, who depend on payments from the budget shouldn’t be hostages of their indecision or bureaucracy,” Zelensky said in a video address on Telegram on Thursday.

The EU has suspended the allocation of €8 billion, and this “artificial delay in macro-financial aid for our country is either a crime or a mistake,” he insisted.

The president did not name the nations responsible for withholding the money, but expressed hope that it’s only a mistake “and it will be corrected.”

Earlier this week, the deputy head of Zelensky’s office, Igor Zhovkva, said that Ukraine has so far received just €1 billion from Brussels, while “some EU countries, including Germany” are blocking the transfer of another 8 billion.

With Kiev unable to patch the holes in its budget due to the fighting and the dire economic situation, the EU promised in May to provide Ukraine with €9 billion in subsidies and low-interest loans by the end of 2022.